Paris Hilton’s contributions to the popular zeitgeist were reflected in audience cheers at her House of Wax demise. Dead-eyed, dead inside she would make a better horror villain but her passing was more satisfying than her infamous tape (which admittedly featured better acting).

However she’s not the only one whose passing was welcomed by theatre-goers. 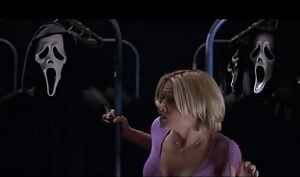 To follow up on our Celebrities we Were Glad to See Die in Horror Films list here are more gear grinder who we applauded being sent to the great beyond.

Starting off as a Playboy Playmate then moving to MTV as the host of Singled Out, former The View co-host Jenny McCarthy has been annoying us for over 20 years. Besides being sub-par at every thing she attempts, McCarthy makes our list for her whacked out views of the medical profession. The mother of an autistic child, McCarthy advocates the use of the highly controversial (and dangerous) chelation therapy as well as a “gluten-free and casein-free diet, hyperbaric oxygen chambers, aromatherapies, electromagnetics, spoons rubbed on [the] body, multivitamin therapy, [and] B-12 shots” to cure the condition. McCarthy is also an outspoken anti-vaccination advocate who insists that vaccines cause autism – a claim that has not been supported by any medical evidence and is based on a study conducted by discredited quack Andrew Wakefield. The claim has also been proven to be based on manipulated data and false evidence.

McCarthy’s rather unconventional views, which she has pushed on the public as gospel, prompted scientific skeptic and professional debunker James Randi to award her the tongue-in-cheek Pigasus Award for her contributions to “Pseudoscience” and being the “Performer Who Has Fooled The Greatest Number of People with the Least Amount of Effort”. McCarthy has been repeatedly denounced by medical professionals and protested by other parents of Autistic children who feel that her outspoken views are doing much more harm than good. 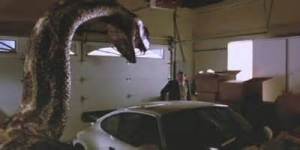 2000’s Python was a bargain basement TV movie rip-off of Anaconda. McCarthy over emotes embarrassingly as rich bitch Francesca Garibaldi. Early in the film, a giant CGI Python – so fake-looking it makes the birds in Birdemic look like the height of realism – finds its way into her garage. With a quick flick of its tail, off goes her obnoxious head. No amount of chelation or aromatherapy could put her back together again.

Oh, and she was also fatally stabbed in the back in the second Scream sequel.

America’s Next Top Model (ANTM) has gone on for 21 seasons (or cycles as they are accurately referred to, the same thing basically recycled 20X) with no signs of abating. In all that time, the show hasn’t produced anything remotely resembling a “top” model.

The one constant of every cycle of ANTM is Tyra Banks, the show’s originator, head judge, host and executive producer. Her role on the show is confounding. On the one hand, she acts a sort of den mother self-esteem queen: building up the contestants with platitudes and urging them to “be themselves and do their best.” On the other, come judging, she tears them down with cruel ferocity. Banks, always a proponent of diversity, has helped expand the scope of what is considered beautiful; to wit she’s gone so far as to include short girls and fat girls. Ugly girls can’t be far behind.

And let’s not forget the finale of each episode where she “holds in her hands” (where else could they possibly be?) headshots of the contestants who “are still in the running to become America’s Next Top Model” while speaking barely half a decibel above a whisper. Maddening.

Halloween: Resurrection effectively sunk the famed franchise and forced the Rob Zombie-helmed reboot. That’s bad. Tyra Banks’ character Nora gets killed in it. That’s good. Michael Myers offs Laurie Strode in the first fifteen minutes and the film features a kickboxing Busta Rhymes. That’s bad. Tyra Bank’s character gets killed in it. That’s good. Tyra’s on-screen death was cut from the final film (although can be found online.) That’s bad. You still see the aftermath of the death depicting Tyra’s lifeless body hanging from a garage ceiling and dripping blood. That’s good. Damn Tyra, you sanctimonious hypocrite. We were all rooting for you, girl! Guess you don’t have what it takes to be in the running for the girl that lives to see the final credits. Shame.

We wanted to include Lindsay Lohan on our list. We really did. Trouble is Lilo’s character survives the only horror film she’s appeared in (the loathsome multi-Razzie award winner I Know Who Killed Me.) But do not fret for we can include Lohan’s progenitor, the inimitable Tara Reid!

Emerging in the late 90s with a voice Elaine Benes would describe as “flinty” and acting ability we would describe as non-existent, Reid soon become more famous for her antics off-screen than on. Her hard-partying ways and stumbly, slurring nightclub exits made her a TMZ fixture and soon she was known more for her botched plastic surgery procedures and embarrassing red-carpet wardrobe malfunctions than her Palme D’or winning films such as My Boss’s Daughter and Van Wilder.

We previously discussed the tepid Urban Legend in our 7 Worst Horror Movies Shot in Toronto List. We do not like it. But we do like the scene where Reid’s character Sasha Thomas gets hacked to death by an axe. Later, her body is discovered and the audience is treated to the sight of Ms. Reid’s severed hand. Satisfying!

Punch-line avoider Dane Cook has become his own punch-line, a comedy joke and outlier despite hailing from a hotbed of comedy, Massachusetts (Doug Stanhope, Louis CK, Bill Burr, Nick Di Paolo, Patrice O’Neal etc) Cook is vilified by his peers for being unoriginal, egotistical and overrated. He has also been repeatedly accused of plagiarism and many have noticed similarities between a number of Cook’s routines to bits performed and recorded by Louis C.K.

Detention is an underrated and underseen parody, satire and homage to teen and slasher flicks that is also a pretty darn good slasher flick itself. It’s sharp and witty — two things Dane Cook isn’t yet ironically features Dane Cook. He plays the school principle who gets hacked in the stomach with an ax. Unfortunately, his death is undone by film’s end due to some time-travel shenanigans.

In the even more underrated serial-killer flick Mr. Brooks, Kevin Costner plays the titular character: a man who outwardly could not be more milquetoast yet is also The Thumbprint Killer, a serial murderer who has eluded police for years. Cook plays a man with a killing-fetish who photographs Brooks during a murder. He then blackmails Brooks with the photographs but promises he’ll keep them hidden if Brooks allows Cook’s character to ride along with him and participate in a murder (What’s with Cook and copying?) Brooks begrudgingly agrees but ultimately grows as weary of Cook as the audience does and cleaves Cook’s throat open with a shovel.

Mrs. Smith, who is currently stinking things up on television’s otherwise decent Gotham, is known less for her acting and more for the man she married and her two obnoxious offspring. In a recent interview promoting upcoming albums, Jaden and Willow Smith were asked what themes recur in their work. Jaden replied “The P.C.H. being one of them; the melancholiness of the ocean; the melancholiness of everything else.” To which Willow responded “And the feeling of being like, this is a fragment of a holographic reality that a higher consciousness made”, prompting Jaden to hubristically state “As soon as me and Willow started releasing music, that’s one thing that the whole world took away is, okay, they unlocked another step of honesty. If these guys can be honest about everything, then we can be more honest.” Wha-aht!?!?

The sins of the child can often be attributed to the parent, but truthfully, has Jada Pinckett Smith ever acted in anything remotely of value other than Doogie Howser, M.D.? The best film on her resume is probably Scream 2. In the sequel, producers wanted to repeat the gambit of killing off the biggest star before the opening credits. Drew Barrymore is admittedly a name, but Jada Pinckett (this was pre-Fresh Prince betrothal)? Nonetheless, seeing Pinckett stabbed repeatedly by Ghostface in a movie theatre before stumbling in front of the screen screaming and then collapsing was worth the price of admission.

SEE OTHER CELEBRITIES WE WERE GLAD TO SEE DIE IN HORROR FILMS and CHECK OUT OUR WEEKLY REALLY AWFUL MOVIES PODCAST.