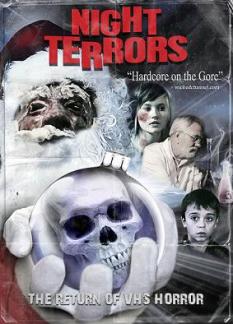 We have a soft spot for anthology films. Perhaps it was Creepshow, perhaps the old Amicus classics starring Peter Cushing and Christoper Lee. Perhaps a little Twilight Zone, a little Tales from the Crypt. Whatever it is, there’s something to be said about a short little horror-tale that (hopefully) punches you in the gut.

Night Terrors is a low-budget throwback to horror anthologies. It’s also a throwback to VHS Horror – those days when horror slipped out of oblong boxes or were housed in clamshells and we were urged to be kind and rewind. As such, the film purposefully has those little touches that made VHS so charming (annoying). You get the unstable picture, muted colors, tracking lines and jitter. The VHS after affects are a fun touch but not entirely necessary, especially in light of the fact the Night Terrors is shot in widescreen when the majority of VHS films were panned and scanned.

Anyhow, on with the show. Like any good anthology, Night Terrors has a wraparound tale. Here it’s an older sister forced to stay home and babysit her bratty brother. The rugrat wants to hear a story before beddy-bye and big sis obliges with wildly inappropriate tales of homicidal Santas, womb-ripping research professors and rampant, mutating STDs. “Goodnight Moon” and “Green Eggs and Ham” these are not.

The first tale is “Massacre on 34th Street”, a story of a homicidal, ax-wielding Santa Claus. We covered many of these in our 13 Christmas Horror Movies list and unfortunately the killer in this segment is no Billy from Silent Night, Deadly Night. “Massacre” unfortunately reveals the limitations of the anthology genre as there’s not enough time to build up any sort of sympathy for the victims – here a bunch of Punks squatting in a graffiti and flyer covered hovel – or any rhyme or reason for the killer. We never truly learn who this Killer Kringle is and why he’s so chop-happy. The segment does feature some nice gore and brutal killings, but it’s the weakest of the three.

Proceedings pick up nicely with the next tale, the nasty, grim “Baby Killer”. Here we meet disgraced medical professor Dr. Herbert Cain (a nod to Re-Animator perhaps?) Dr. Cain’s daughter has terminal leukemia and he’ll do anything to save her life. His unorthodox stem cell research got him booted from the university and he’s now toiling for a cure in his basement while daughter is dying upstairs. His research leads him down some dark, disturbing paths as Cain’s desperation grows. If you’ve ever wanted to see an attempted strangling by an umbilical cord, this is the segment for you. With a wisp of the French gorefest Inside, this segment is decidedly not recommended for those who are expecting.

The third and final segment is the best of the bunch. When Sis catches Junior pawing through a dirty magazine, she tells him a tale to swear him off male curiosity forever. In “Abstinence”, two college slackers, Jonah and Mouth, bemoan their lack of success with the fairer sex. After a night of partying where Mouth unsuccessfully attempts to help his bud score the girl of his dreams, they stumble home and wake up on the couch late for class. Once there, one of their loser buds regales them with his tale of exchanging bodily fluids with an exotic dancer at the local gentleman’s club (must have been in the champagne room.) To prove he isn’t full of it, he shows his back covered with deep gashes and repulsive pustules.

Before long, the STD is spreading through campus faster than Taco Bell makes it way through the digestive system. Students are throwing up blood, teeth are falling out and everyone save Jonah and Mouth suffers from skin conditions so severe no amount of Proactive would suffice.

“Abstinence” features some great makeup and camera effects including a wicked cool bullet-through the-head shot. Jonah and Mouth make for an endearing duo and the segment even gives a slight Shaun of the Dead vibe if Shaun of the Dead featured a disgusting, diseased penis.

As a whole, Night Terrors is good fun. Yes, the acting is far from bravura but there is lots of DIY gore and a fun end to the wraparound to boot.