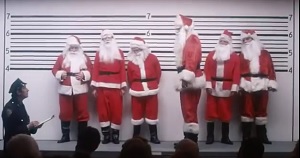 Most people are familiar with the likes of Christmas horror movies Jack Frost and Gremlins. So we thought we’d grab our shovels and dig a little deeper for some heart pounding horror (much like those piles of snow which cause so much cardiac arrest in these parts every winter). In our list of 13 Christmas Horror flicks, we found fun curiosities to line Christmas stockings. This season, if you notice a clatter, don’t spring forth from your bed to find out what is the matter…call 911 immediately as you’ll probably find a killer Kris Kringle.

8. Christmas Evil, AKA You Better Watch Out: 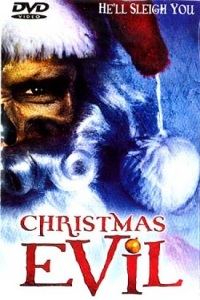 No less an authority than John Waters says this Christmas movie is “the best one ever.” Disgruntled loner Harry becomes obsessed with embodying every aspect of Saint Nick after an early childhood trauma in which he witnesses Mommy | Santa Claus foreplay and commits self-injury as a cry for help. In this psychodrama, Harry becomes so obsessed with Santa he gets a job in a toy factory, taking umbrage with the company’s corporate social responsibility initiative with a local children’s hospital, saying they’re not doing nearly enough. His behaviour with co-workers becomes increasingly odd.

I got you guys’ number. The right tune. I’ve been trying to find the right notes to it for as long as I can remember. Well, I found them. I can play the tune. Co-worker: I tell ya Harry, I don’t know what the fuck you’re talking about! 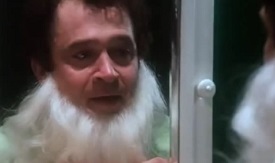 As his obsessions take hold, he begins lurking in the bushes and filling in a giant ledger book detailing “naughty” behavior by local kids including oddly, “bad personal hygiene.” Harry then begins dressing as Santa and heading out on the town to commit mayhem.

Most un-Fa-La-La-La-La moment(s): Suited up in red, he waits outside a church service and when he is derided by parishioners doing a mock TV news streeter interview with him, he stabs one of them in the eye with a nutcracker toy. He also exacts revenge on a co-worker Frank, for whom Harry had to cover when he’d called in sick (only to be spotted at a local bar the same day). Frank gets his by being smothered with a sack of Christmas toys. 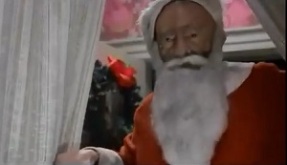 9. Tales from the Crypt (All Through the House): In a segment from the 1972 Amicus Productions adaptation of stories from the classic EC Comic, wife Joanne (played by Joan Collins) murders her old stuffed-shirt, fez-wearing husband on Christmas Eve. She puts her daughter to bed, considers how to dispose of the body and then has a cigarette (hey, it was the 70s). All of a sudden, a bulletin comes across the airwaves:

We interrupt this program for a special announcement: a man described as a homicidal maniac, has escaped from the Hospital for the Criminally Insane. He is 6’3, 210 lbs., dark eyes, bald and may be wearing a Santa Claus costume…

Soon, the murderer becomes the victim as she’s stalked by, you guessed it, a killer in a Santa suit.

Most un-Fa-La-La-La-La moment(s): “He’s here mommy, I let him in! It’s Santa!” Joanne’s daughter Carol unknowingly lets the killer inside and mommy is throttled in front of the crackling hearth. 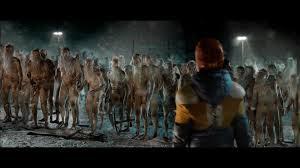 10. Rare Exports: A Christmas Tale: Straight out of Finland comes Rare Exports: A Christmas Tale. Santa is buried 468 feet deep under the Korvanturi Mountains. An American excavation project appears to unearth the old boy who is found naked and hiding in a local’s farmhouse. And he’s far from jolly unless you count biting a chunk of a villager’s face off an act of joviality. The villagers hope to ransom Santa back to the Americans for $85,000. Meanwhile, all the children in the village go missing and every radiator and hair dryer is stolen… Turns out it wasn’t Santa after all but one of his elves. The real Santa is still frozen in an enormous block of ice that the feral and bloodthirsty elves are trying to thaw. It’s up to the villagers and the lone remaining child, Pietari, to band together and stop the elves before they can free their leader.

Most un-Fa-La-La-La-La moment(s): When the block of ice encasing the real Santa is discovered, the villagers also find their lost children, each stuffed unceremoniously in a potato sack. 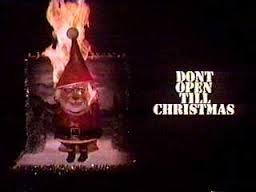 Sleazy, sleazy,sleazy! This 1984 British import is as far from George Bailey as you’re going to get. A few days before Christmas in London and a masked killer is dispatching anybody and everybody in a Santa suit. Scotland Yard Inspectors Harris and Powell are on the case, but instead of issuing a city-wide edict banning all red-velvet outfits with white fur trim, they focus their attention on Cliff, a flute-playing street musician with Rick Springfield hair who is the boyfriend of the daughter of one of the first victims.

As the body count increases at an astounding pace (mostly drunkards and derelicts), Harris and Powell are stymied. The only lead they’re given from witnesses is to look for someone with “smiling eyes”. Helpful that. The film features one of the most obvious red herrings in murder-mystery history but is well worth seeing as a Eurosleaze antidote to the umpteenth television airing of “Elf”. Heck, it even features a scene with site fave Caroline Munro (The Abominable Dr. Phibes / The Spy Who Loved Me / Maniac). 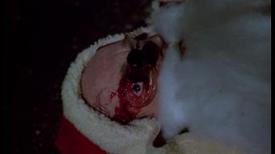 Most un-Fa-La-La-La-La moment(s): Don’t Open Til Christmas is as fetid as past-due eggnog. The Santa slaughterer is merciless and each kill is more gruesome than the one prior. The chestnut vender who gets his face pushed on hot coals then is lifted up just long enough for the audience to get a glimpse of his roasted visage stands out. Still, it’s topped by the scene where the one circus Santa is out having a tinkle when the killer kicks him in his baby maker with a shoe knife before sticking him in the neck with a broken bottle. When the second circus Santa runs to his buddy’s rescue, he gets the bottle in his eye for his troubles. As he slumps to the ground, the camera lingers long enough to show his eyeball slough off his face. 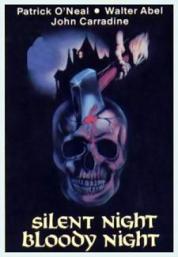 12. Silent Night, Bloody Night: This chillingly effective film from 1972 tells the tale of the Butler House. Beginning on Christmas Eve 1950, a man consumed by fire bursts out of a house before succumbing to his death. The death is ruled accidental and the man identified as William Butler, the house’s owner. Butler leaves the house and all that is in it to his grandson Jeffrey on the condition that Jeff leave the house untouched to remind the town of the “inhumanity and cruelty” that occurred within its walls.

Twenty Christmases later and Jeffrey decides to sell the house (probably needed some quick cash for his Xmas list) and sends a lawyer to negotiate the sale. He meets with the town’s mayor and other notables and agrees to sell the mansion back to the town for $50,000 cash (“All that cash” bemoans the mayor, oblivious that he is getting a steal even at 1970’s real estate prices.) That evening, the lawyer and his young Italian mistress spend the night in the house. Their no pants dance is interrupted by a very inconvenient and bloody ax murder. Meanwhile, the mayor’s daughter, played by Mary Woronov of Eating Raoul and Rock N’ Roll High School meets Jeffrey. 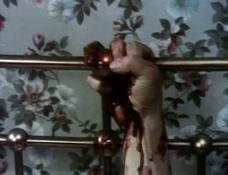 Her and Jeff decide to do a little investigating and discover that in 1935, Butler turned the house into an asylum to commit his daughter Marianne and other inmates. Long presumed missing, could Marianne be back to exact revenge?

Most un-Fa-La-La-La-La moment(s): In a flashback to Christmas Day 1940, the doctors of the asylum are gorging themselves silly at a Christmas feast. Meanwhile, Butler, who regrets what he has done and feels the doctors have hurt his daughter, frees Marianne and all the inmates. Like zombies straight out of Night of The Living Dead, the inmates descend upon the Butler house/asylum and brutally massacre all the doctors. 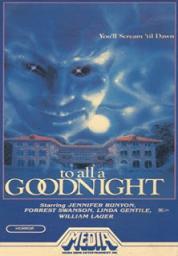 13. To All a Goodnight: While a lump of coal has already gone to Santa’s Slay, another is reserved for To All a Goodnight. More formulaic than sodium chloride yet coming up short in the elements of the formula we appreciate, this 1980 slasher is just lame. Lame script, lame execution, lame killer, lame ending, lame everything. Plot: Take it away IMDb – “A group of teenagers at a party find themselves being stalked by a maniacal killer in a Santa Claus costume.”

To All a Goodnight begins at the Calvin Finishing School for Girls on Christmas “two years ago”. The opener is a dead-ringer to the beginning of the far superior Prom Night.  During what appears to be some sort of sorority initiation, a girl who couldn’t look more like a department store mannequin if she tried (thanks to really crummy special effects, an actual mannequin), falls off a balcony to her death. Two years later, Christmas vacation and see above. What is remarkable is the nonchalant attitude the kids have as they notice their numbers dwindle. “Oh, they’re probably wasted” or “Oh, you know him, he’s probably sleeping”. And this is after they discover the first body! To all a Goodnight was directed by exploitation-icon David Hess and features a den mother named Jensen and a dim-witted caretaker named Ralph, one of whom is probably the Santa-suited killer. Not spoiling, just saying. 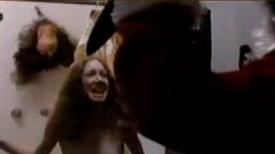 Most un-Fa-La-La-La-La moment(s): After the discovery of the first body, two cops are ordered to guard the house. But one needs to get some sleep (to paraphrase Breaking Bad’s Jesse Pinkman, “Police much, Bitch!”). One of the girls interrupts his beauty nap to test out the mattress coils. After their bedroom boogie, the girl gets up to take a shower. Camera pans to a familiar pair of black boots entering the room. Cop gets a knife in the back and the girl finds the severed head of one of her sorority sisters impaled on the shower head. Sounds good? It isn’t.

RETURN TO PART I OF 13 CHRISTMAS HORROR MOVIES