Would you take a job, no questions asked, offered by a shady character in an alley whom you’ve just met? Tough one. The market is rough, granted, but we’d at least like to know about health benefits, use of a company car and possible room for advancement. Not so, broke as a joke Owen in The Door, an indie horror flick that uses the limitations of its low budget to its advantage.

Recently laid-off Owen is penniless. Strapped. Cleaned Out. Skinflint. But he’s a decent enough fella to know that when you witness a street crime, gosh darn it, do something about it! For all we know, John Quinones from “What Would You Do?” could leap out at any second shining a camera and waving a mic in our face.

So when Owen stumbles upon an attempted mugging, he pulls out his mobile and begins recording. This spooks the hooligans and they hit pavement. Of course no good deed goes unrewarded (or so we hope. Yet to receive karmic payback for always being kind and remembering to rewind.)  So for saving his skinny little tuchus, the muggee, a wealthy Japanese businessman, hands Owen a wad of cash and offers him a job starting that very night, the night of Owen’s daughter’s wedding. Sorry, wrong flick. His girlfriend’s birthday. Now it’s starting to seem a bit nebulous, especially since the businessman then straps on a pair of brass knuckles in hopes of finding his assailants.

That night, Owen reports to an abandoned meat-packing plant (aren’t they all?) He is told by the man whose post he is relieving that he is to put on a security guard uniform and watch a door for the next twelve hours. Wow. We’ve worked a lot of mindless jobs in our time but compared to this flipping burgers at McDonald’s looks like astrophysics research at MIT. But of course there is a catch. Besides having to work the night shift, which truly sucks, Owen has to make sure the door stays shut. And if anything does come through the door, Owen is instructed to shoot it dead. So far very Twilight Zone by way of Kafka. 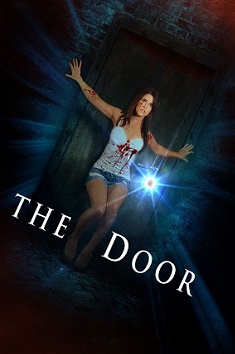 Owen isn’t too comfortable in his new appointment so he calls for a replacement and is informed that one will arrive in an hour or two, but in the meantime he should just sit tight and WATCH THE DOOR! The replacement arrives shortly. Owen goes home safe and sound. Roll credits: The End. Yeah, right. This is a horror flick! Something must go wrong, and wrong arrives in the form of Owen’s girlfriend and her three inebriated friends who decide to bring the party to him. The most drunken of the lot wanders off and goes missing. Cue search party and we have a movie!

To say more would be to ruin the tasty twists and turns of The Door. The film isn’t perfect. Some of the actions and reactions of the characters don’t seem natural. They even commit sin #1 of horror movie search parties: they split up!  Nonetheless, it’s a solid effort and better than many low-budget indie films of its ilk. The atmosphere is tense and the suspense is ratcheted up with eerie sound design and a creepy minimalist score. The use of bright primary color lighting is also effective and the small cast is game, particularly the ultra-likeable local girl Alys Crocker.

There are allusions to a larger supernatural, almost Lovecraftian element at work in the plant that never really pays off and not every question raised is given an answer. Nonetheless, there are enough surprises in the narrative to make for a satisfying experience and the ending is a satisfying punch in the gut. The Door isn’t a home run, but it is a solid triple.