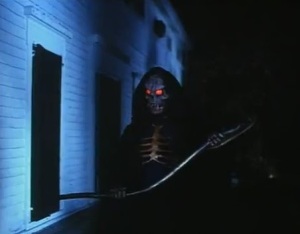 Spookies is an amalgam of so many horror films it’s nearly impossible to keep track. We say nearly but let’s give ‘er a go; There’s a bit of The Brood, Phantasm, Curse of the Black Widow, Alien, Creepshow, From Beyond, The House by the Cemetery, Night of the Living Dead, Tales from the Crypt, Bride of the Monster (and maybe every movie with bride in the title made between 1955 and 1962) and 13 Ghosts.

There is also your “starting five” 80s slasher film roster of people lost in the woods. You’ve got the square, the alpha male, the jokester (in the case of Spookies, he’s got a puppet named Mook and the alpha male’s named Duke — “nobody gets the better of Duke Green!”), the girl with the big rack and less traditionally pretty woman who’ll probably survive. There’s another woman, who’s English. So there’s a twist. She can come off the bench.

However, Spookies is three highly incongruous elements cobbled together, the obvious product of the film’s financiers taking the movie away from the original film maker and handing it off to someone else.

As a result, at the beginning you have a boy skulking about in the woods. He spots a man lurking in the bushes, gives him a light (rather than running) and then explores a mysterious mansion with birthday place-settings just for him. But this plot is abandoned almost immediately.

Then it switches to a Tall Man / Phantasm sorcerer type “Kreon”, a name which sounds like an aerosol propellant. He is vaguely Basil Rathbone-esque and has a vein pulsating in his head. And he’s holding a beautiful bride hostage while wailing:

What a cruel joke. My power is nothing compared to the power your beauty has over me..I am your prisoner, a slave to that which I can never possess!!

That’s when our “starting five” (plus one) hit the cliché hard-court as they get lost and drive up to the creepy house by the cemetery for some ill-advised exploring.

While in the house, the crew happens upon a Ouija board (“communicate with who? The dead??? They’re dead!”) and the evil sorcerer casts spells on them from a drawing room upstairs, summoning various demons. You know he’s crazy as he calls chess a simple game but he also has a Brood-ish offspring with creepy incisors.

A slew of creatures too numerous to describe here but forgivable given our yeoman’s effort at the outset of this review, descend on the hapless crew (and occasionally ascend as well, as they claw their way out of dirt)…but wait! There is another shift in focus to the bride and her bid to escape.

The opener is harrowing, Fulci-esque and the night scenes are stunningly shot. The effects are not nearly as bad as they could be given the modest budget but there are corny lightning strikes and a plot that’s all over the map.

However, there are several selling points: two of the creatures disintegrate upon contact with…cellar wine (!) and some members of the cast have no qualms about quaffing weird vials of cobweb-caked liquid. Guess if you’re facing a demon wrath it’s good to grab some Dutch courage. Also, a victim is dispatched with a scythe and instead of being hacked in two, sails ten feet through the air. Hilarious fun.