Cow obstetrics? Just when you think you’ve seen it all, along comes a film that’ll put you off your veal parm.

Wags dubbed it Old MacDonald meets The Thing but give credit where credit’s due: Isolation is a pretty dark and effective thriller and that’s no bull.

A put-upon family farmer Dan (played by John Lynch best known, thankfully not to our readers, for his work in the Gwyneth Paltrow vehicle Sliding Doors) rents out his property to a creepy biotech company Bovine Genetics Tech that is running weird animal experiments.

One night, a cow’s water breaks and the farmer, whose property is perpetually shrouded in darkness, is called into action. He enlists the help of two trailer itinerants with whom he’d previously had a run-in, but lets trespassing bygones be bygones if they agree to help him with the birth of the calf. 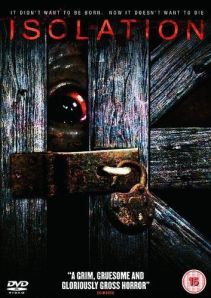 Now, full disclosure: we’re big city guys. We had no clue about ratchet-style calf pullers or the finer points of calving but from what we can gather, the motley crew encounters issues with the “breach position” (the calf is tail-first).

They eventually yank it out by a rope and pulley method which looks like some kind of bovine rowing machine. And then, in what can best be described as a film first: the farmer, in order to get it to breathe properly, picks up the calf and swings it around his head like an Olympic hammer throw.

Now, according to the Ontario Veterinary College, clearing the mucosa this way is probably ill-advised but what in hell do we know? We just eat ’em.

Anyway, something is odd about the calf. It’s (probably) suffering from the spins but also the kind of thing that makes the NFL and NBA frequently multi-generational: Large Offspring Syndrome. In LOS, bovine embryos exposed to unusual environments prior to the blastocyst stage can result in severe developmental issues, such as overly large size and organ defects. 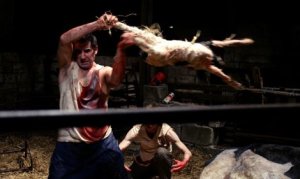 Don’t try this at home. Unless you live on a farm and have incredible upper body strength

Let’s just say the calf was messed up by biotech.

It bites an attending vet and the crew brings out a cattle gun, not seen by either or us since No Country for Old Men. The calf is wacked but something sinister is observed in the autopsy: it’s pregnant!