If you’ve ever wanted to see a movie where a guy shambles into church nude while the congregation is belting out The Battle Hymn of the Republic, you’ve come to the right place (and if you ever wanted to duplicate the above, don’t worry – we won’t judge). Bloody Wednesday may sound like a Brit intensive idiom, but it’s also the title of a movie and a bit of an exploitative one at that.

Equal parts The Shining, The Tenant and maybe Taxi Driver, it’s the story of an auto mechanic’s descent into madness (sitting in front of a collection of car parts strewn across the floor he wails “I just can’t make things fit anymore!”). 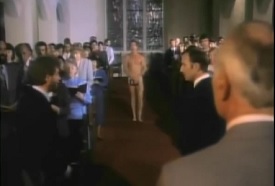 Grease monkey Harry, is let go from his job at the garage after a customer is understandably miffed that “there’s no engine in my car!”

His concerned brother, an accountant named Ben, takes him into the nearest hospital psych ward where he’s evaluated – and one might add, very poorly (The doc: “I’m gonna go against my better judgment and release you”). Jeez, if walking into a church nekkid and sitting on the floor at your place of work lamenting the state of your existence can’t get you committed – overnight at least – that’s very troubling.

Anyway, the accountant (and this is a stretch) does the books for…wait for it…a creepy hotel that is also abandoned. And for some reason, suggests that his brother can rest there and recuperate. That’s where Bloody Wednesday morphs into The Shining/The Tenant.

At the not exactly five-star accommodations, Harry hallucinates other tenants, a snake crawling up his torso and a bellhop with deep pockets and draws the attention of local law enforcement. Harry’s also set upon by a gang, whose muscled leader is a dead-ringer for Rambo.

Now, Harry is no shrinking violet (we don’t really get to see what else may have shrunk earlier in the church), fully capable of handling himself with firearms. He quickly shows the Rambo/Warriors-type gang who’s boss (ringleader: “he played Russian roulette on us, the guy’s a weirdo!”) 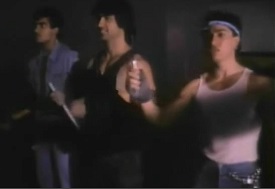 Gradually, as Harry begins to lose more of his marbles and confides in a teddy bear, he considers lashing out at society and hits up Rambo for the appropriate weaponry.

Bloody Wednesday then slumps toward its gruesome shoot-em-up conclusion in which among other victims, a poor fry cook gets it and then face-plants into eggs on the grill. Keep on the sunny side.

This was before mass murders sadly became a commonplace part of American culture and Bloody Wednesday was supposedly one of those ripped-from-the-headlines productions based on the San Ysidro McDonald’s massacre, in which a survivalist who claimed he was being followed by the CIA, gunned down 21 restaurant patrons in a San Diego restaurant in the course of 90 terrifying minutes. Producers for obvious reasons (…er, legal reasons) changed the protagonist’s name, the murder weapon and also the locale (to a diner).

Amidst the frequent synth corniness and inert acting the film poses interesting questions about how mental illness is treated as the real-life gunman’s calls for help and frequent brushes with the law were also ignored by health and police.

Psychiatrists dub these guys “pseudo commandos”, killers who arrive at a crime scene well-armed, often in camouflage or warrior gear, and pursuing a personal payback agenda. Think Taxi Driver. Although that movie formed the basis for the delusions of would-be Reagan assassin, and not a pseudo commando, John Hinkley Jr. He’d seen it 15 times. Weird to think that both he and the Columbine shooters, who favored the Korean revenge cult classic Old Boy, had exceptional taste in movies if nothing else.