Twenty Signs You Might Be in a Bad Horror Movie

1. You open your kitchen cabinet and a hissing cat inexplicably jumps out at you. Sometimes, for variety, an off-screen cat will break something a la Friday the 13th: The New Beginning or they’ll jump out of a garbage can (Halloween II) and scare the bejesus out of some hapless security guard (as an aside, a security guard is the most thankless profession in horror. Cops will occasionally bite it, but they’re usually just on hand surveying the carnage just before the final credits). Felines are best used when they expend one of their nine lives and come back to life (Pet Sematary or Re-Animator) to wreak havoc.

2. Your car scored poorly on a JD Power survey. Admittedly a lot of vehicles in horror films are real beaters but if they’ve just come off the lot, there’s no reason why they shouldn’t start just when you try the ignition (while the maniac is smashing all the vehicle’s windows, rather than just the window on the driver side, where the victim is).

3. You try the ignition again. Still nothing.

4. You try once more. Nothing still but then just in the nick of time…SUCCESS.

5. There is a gnarly gas station proprietor in a remote gas station. The proprietor has two teeth, is poorly acquainted with the finer points of hygiene, and wouldn’t you know it, the station has been out of service for a decade! The gold, silver and bronze of the movie filling station Olympics are the following: The Texas Chainsaw Massacre (where Leatherface’s older brother works), The Hills Have Eyes (the attendants shepherd the victims in the direction of the mutants) and perhaps the granddaddy of ’em all, not a horror but horrifying enough…it’s Burt Reynolds and company’s last stop before the gorge in Deliverance. In Deliverance, Ned Beatty is told after complimenting the attendant on how he wears his hat, “you don’t know nothin’.”

6. Vaults are caked in cobwebs. Every abandoned structure (hospitals, warehouses, sanitariums, schools, farmhouses) is of course, filled with cobwebs. Vaults should never be opened without a trained anthropologist nearby but when they are, they’re completely caked in cobwebs.

7. You enter any small town and everyone en masse stops what they’re doing and stares straight at you. This applies to bars, gas stations, barbershops, florists, the local chamber of commerce.

8. Your child finds/discovers anything old, especially dolls. Dolls are bad! No dolls. Ever. Same goes for antique books and really, if you find an old box of VHS tapes, straight to recycling!

9. You get an obscenely good price on a large piece of property…perhaps somewhere secluded…in the country…with no neighbors. House Hunting, The Amityville Horror, Burnt Offerings, Sinister, there are countless examples. Due diligence is the name of the game.

10. Your significant other decides to install closed-circuit television recorders throughout your entire house. See a marriage counsellor before someone’s head begins to spin and go all fuzzy.

12. You suddenly forget how to use a doorknob. Turn then push. Don’t pull! This is at least preferable to the protracted shot of the turning doorknob.

13. You have a friend who has a relative who has a cabin by the lake. You decide to join him for the weekend. The car pulls up, you get in and spot a dumb blonde, a frat-boy jock, a stoner and a black guy. And of course mirroring the real world, life expectancy for males is always shorter. 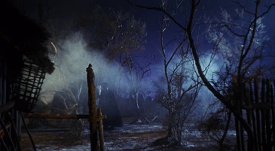 14. You walk anywhere at night. There’s fog / dry ice everywhere. Fog is so ubiquitous in horror, there’s an actualy movie called The Fog. In the book, Writing the Horror Movie, the authors say that “fog was used in every film by the Italian director Mario Bava: it is the horror movie cliché, as it creeps slowly across the graveyard, settling at waist height…” Perhaps it’s no coincidence then, that fog/dry ice seemed to inhabit every 80s hair metal video.

15. Suddenly, in some remote backwater, you realize you have no cell reception. Just double back, go home and cuss out AT&T.

16. You pull over to the side of the road during a torrential rainstorm. You aren’t a member of AAA and your car??? See # 2 in this list.

17. You inherit a European castle/villa/estate/lab from a relative. See Castle Freak, The Abandoned or Hidden 3D, where the protagonist is s surprised to learn that he has inherited The Sanctuary, home to his deceased mother’s experimental addiction treatment center. So it should come to no one’s surprise that his mother was involved in weird, sinister science. But for god sake, couldn’t he have just said “hmmm, interesting” instead of investigating the matter with friends?

18. Your new best friend is the lone survivor of a traumatic event that she doesn’t want to talk about. You’re in a sequel! It will happen again!

19. You make the acquaintance of someone named Lou S. Cypher or Louis Cypher. And please don’t get anyone from the university to interpret those hieroglyphics or gnomic passages from dusty (ok, cobweb-ridden) old tomes.

20. You find yourself yelling “Hello” or “Is Anyone There?” Asking if anyone’s there is a sure-fire way to get someone who is there, to know that you’re there. There are too many examples to cite but just one is Apartment 143 and yes, there is someone there.