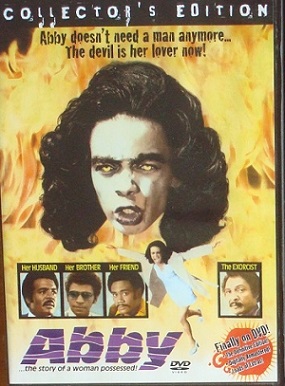 Homage is a much prettier word than knock-off, typically associated with Chinatown handbags. We’ll go one better still. Abby (1974) is a tribute to The Exorcist! (and you can probably score a knock-off copy in Chinatown, but we digress).

Forget the son of a preacher man, it’s the preacher man’s wife Abby who’s the focus here. She is a Louisville marriage counsellor, sings in what’s admittedly a pretty lousy gospel choir, and more importantly for plot development, is possessed by Eshu, the trickster god of the Yorùbá religion of West Africa.

We first learn about Eshu in painstaking detail as Abby’s father-in-law happens to be a suave world religion professor whose students hang on his every word and tail him around campus like he’s a dump truck and they’re seagulls.

Unfortunately for all concerned, the good doctor’s research leads him to Africa where he conjures up this Eshu spirit from a Nigerian cave. And while there, he probably conjured up some bad mojo as Warner Brothers took legal action against this film, although Italian directors had already pumped out a few Exorcist rip-offs themselves (Chi Sei? and L’Anticristo).

Anyway, the evil spirit apparently had a one-way ticket to Kentucky as Abby starts exhibiting symptoms associated with being possessed, a growly voice, violent, inappropriate behavior, etc, none of which are conducive to being an effective marriage counselor.

Unfortunately, this Blaxploitation horror is not possessed of a big budget and it shows. There is an exceedingly tame shower possession scene, some lame gusts of demonic wind, hints at nudity later (but no payoff) and then Abby hits a nightclub seemingly populated by polyestered extras from Dolemite (please check out the Really Awful Movies Podcast where we examine Dolemite).

Anyway, the professor returns from Africa to assist his reverend son, who has in the interim, been asking questions of Abby’s brother of the “She is acting weird, is she on drugs?” variety. Pharmaceuticals are ruled out and naturally an exorcism is done. We could’ve snarkily put this in our site’s “Sequels” category.