So tempting to “toy” (ahem) with the idea of including a racy joke about The Tingler, but in the interest of keeping this post Google-searchable, will impose restraint.

Vincent Price is Dr. Warren Chapin, a penitentiary coroner who is consumed with the study of fear. (If there was ever a movie that proved FDR’s dictum, “the only thing we have to fear, is fear itself,” this is it).

In one of Chapin’s examinations, the doc discovers a phenomenon that is not so much spine-tingling, as it is spine-shattering: a gaping spinal splinter appearing on X-ray of a man who’d been recently executed.

Why the state would waste finite resources on doing autopsies when the cause of death is clearly known is a question for another time, but hey.

Chapin posits that there’s a fear response so intense that when it’s sufficiently built up, it becomes fatal.

Chapin, a consumed, obsessive, unethical (and very frequent) violator of the Hippocratic Oath, fires a starter pistol at his estranged wife to generate the response, and then examines her while she’s passed out. His hypothesis: fear forms a solid spinal mass, which is dissipated through the tension release of a scream. It’s an insanely stupid, yet hilarious idea. 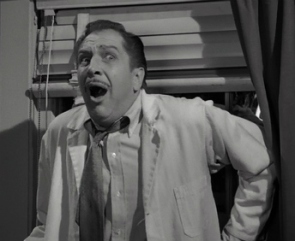 Soon, his friend and deaf mute wife (who are proprietors of a silent film house. Whoa, the jokes write themselves!) become involved in the shenanigans.

The Tingler is the brainchild of William Castle  (Macabre, The House on Haunted Hill, producer of Rosemary’s Baby). Castle, a hype man of the highest order (whose modern exemplars include site pal Lloyd Kaufman and John Waters), was known for taking out insurance policy for those who dropped dead from fright, and for jerry-rigging theater seats to generate a mild electrical current. The so-called Percepto buzzers were a bit of a bust, but still…you couldn’t help but get behind his go get ’em Barnum & Bailey hucksterism.

As for the film?  It’s hilariously absurd and fun. What a premise.

And a bonus…it was the first recorded use of LSD on celluloid.

[Please check out our podcast discussion of The Tingler on the Really Awful Movies Podcast!]

At our latitude, Santa Claus comes with a set of built-in expectations: an unhealthy BMI, a felt suit, more hos than a red light district, and of course, the white beard.

1959’s Santa Claus, aka, Mexican Santa Claus, aka, Santa Claus vs. The Devil, upturns the sled, and gives us so many weird twists and turns that it makes for must-see Christmas viewing (especially if you’re tired of seeing James Caan glower at Will Ferrell on every fourth channel this time of year).

In this version, children, not elves, are the unlucky toilers in Santa’s employment standards-skirting workshop, and director Rene Cardona goes through great pains to show us that the kids are of every color and creed: there’s a protracted scene of ethnic stereotypes as American kids with cowboy hats, Germans in dirndls (say that three times fast) and Africans in grass skirts sing traditional, and decidedly un-traditional songs (the Brits sing a few bars of “London Bridge is Falling Down,” for reasons that defy logic and description).

And weirder still: Santa’s workshop isn’t on the North Pole, but is lunar. So it’s not a stretch to say this film is sheer lunacy.

He really knows when you’re sleeping/awake, as his base is equipped with espionage equipment that’d be the envy of the Stasi: telescopic eyes, satellite dish ears, etc. so he can peer down onto the earth’s surface and find out who’s been naughty/nice (depicted here, oddly, as “good” vs “liars).

Santa’s antagonist is “Pitch,” which sounds like some obnoxious a capella singer but who is in actuality a devilish emissary sent by Satan himself to spoil Christmas (“pitch” is a reference to a pitchfork). Pitch gets inside the heads of children to make them do bad things, like chuck projectiles at Kris Kringle or covet expensive dolls.

As weird and wonderful as Cardona’s infamous Night of the Bloody Apes (in which a bad scientist tries to treat leukemia, a bone marrow ailment, with an animal heart transplant) Santa Claus is a real break from your typical holiday fare, not to mention reality.