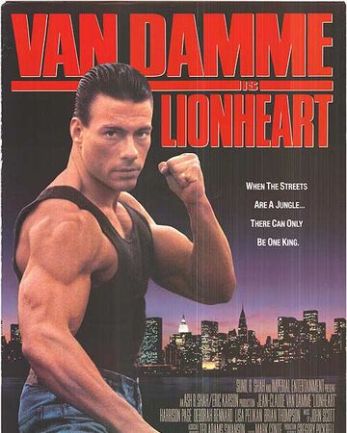 We first learned about the French Foreign Legion through Snoopy, or “Beau Snoopy,” in Peanuts, complete with a kepi head covering.

Who says the writers of this site aren’t cultured?

In Lionheart, Jean Claude Van Damme stars in the first of two 90s action movies where he plays a member of the French Foreign Legion. Still, when weighed (no fat shaming!) against the times Steven Seagal has played an ex-special forces op…you can’t accuse the “Muscles from Brussels” of being typecast to the same extent.

Here, he plays Lyon Gaulthier, who sounds like his very own couture line, a Legionnaire who goes AWOL from the regiment, and is then a stowaway on a ship, all to get closer to his sister in the U.S.

With no papers, and no skills other than being apple to separate a goon from his teeth, JCVD’s Lyon turns to…what else? The underground pit fighting circuit. After all, it’s such a vibrant, moneymaking racket, especially in the years preceding the UFC, and on both coasts to boot.

Who else is occupying the furtive underground world of unsanctioned fisticuffs? Why, it’s some Don King-esque fixer named Joshua.

He’s Lyon’s liaison into the illicit world of hardscrabble men gathering under bridges, in dismal urban locales (and occasionally in squash courts!) to battle for surprisingly lucrative purses.

Lionheart is entirely built upon a foundation of ample Van Damme charisma. And he’s got some in spades, displaying a range far surpassing that of his contemporaries (which is a bit of a backhanded compliment akin to being the most classically handsome wrestler in Turkey). The scenes with his young niece are especially poignant.

And don’t forget to pick up a copy of our action movie book, Mine’s Bigger Than Yours! The 100 Wackiest Action Movies. If you’re a fan of Cannon films, Steven Seagal, bizarre Philippines-lensed chop socky, you’ll love this tome.