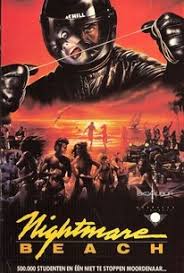 With a motorcycle madman who retrofits his ride with an electrified trident to zap unlucky spring breakers, Nightmare Beach is indeed quite a nightmare — even if few of the kills take place amidst the sun and sand for budgetary reasons.

College students are going missing in fictional Manatee Beach, a city that’s also dealing with the scourge of the Demons biker gang, who wear patches identical to the yellow font used in the Lamberto Bava film of the same name.

The gang terrorizes the local hang-out, Nick’s bar, but this is in no way a call out to It’s a Wonderful Life. What is wonderful though, is this movie, a giallo / slasher pastiche that squeezes out silliness like sunscreen.

There’s a wet blanket college football star, Skip, who distinguished himself in the Rose Bowl by flinging interceptions like a blindfolded Baker Mayfield (or hell, a sighted one). Despite the surfeit of 80s beach babes, cheap booze and pelvic thrusting, Skip simply can’t get into the Spring Break spirit. His buddy Ronny does, chasing skirts like there’s no tomorrow, and eventually falling prey to the masked motorbike killer, who also garrotes his vics when his ride is double-parked. 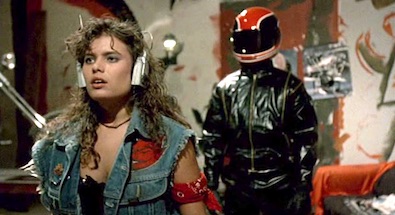 Unfortunately for Manatee Beach, the only thing standing in the way of both the bikers and the antagonist, is the glowering toupeed presence of law enforcement, John Saxon in a role not dissimilar from his part in A Nightmare on Elm Street.

Suffice it to say, it’s up to the non-star quarterback to see what’s up and find out how to stop the worst thing to happen to the state of Florida since Ted Bundy (or maybe Ariana Grande).

There’s so much to like here. There’s the set piece nuttiness of Umberto Lenzi efforts like Nightmare City, a cochlea-pricking soundtrack of knock-off Sunset Strip metal, and naturally, a bevy of babes.