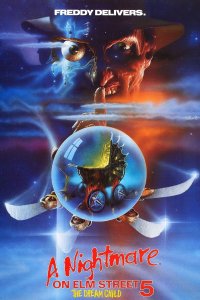 “Freddy delivers” the poster says. Pizza, or babies? It’s the latter here, as evil as obstetrician Cosby turned out to be in real life.

Freddy’s not dead in this fifth installment, so you can forget the Curtis Mayfield song. In A Nightmare on Elm Street 5: The Dream Child he’s sprightly and revivified.

The Springwood Slasher’s worst quipping excesses are tempered, and what you get is leaner and decidedly meaner than the predecessor, A Nightmare on Elm Street 4: The Dream Master. A welcome sign.

The opener’s gangbusters. There’s a woman in a shower, and she sees a gurgling in the drain. Instead of snaking it or calling in a reputable plumber, she reaches into the brown goo, which gurgles to the surface as a geyser. Next thing she knows, the shower is full of water and she’s gasping. A Nightmare on Elm Street 5 immediately plays with the twin fears of closed spaces and drowning.  It’s a terrific updating of The Master’s Psycho scene, and sets a tone for a film that while somewhat uneven, is better than it’s been given credit for. 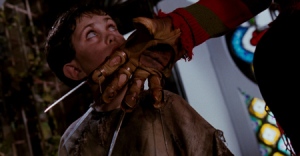 Alice (Lisa Wilcox) is pregnant. And having sleep issues. And the bogeyman with the striped sweater is haunting not her dreams, but those of the child she’s carrying.

Call ’em what you will…a baby…a fetus…NOES 5 asks a question that’s a bit like Philip K Dick’s Do Androids Dream of Electric Sheep, with “do unborn babies dream?” They certainly do. Science tells us that after seven months in the womb, the rest of the time is spent in dreamland. This is by brain wave inference.

That’s as explosive and interesting a conceit as the Nightmare on Elm St series has seen, and if you’re on board with this baby, you’ll have a helluva good time.

Sure, some of the secondary characters have tertiary personalities, but that’s often par for the course for slashers.

While not reaching the transcendent heights of Dream Warriors or the first flick, this one is a surprisingly solid effort. Don’t let the 5.1 on IMDb sway you.