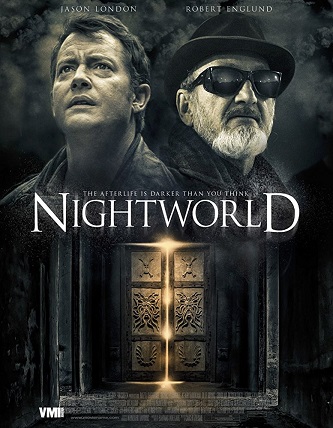 To amuse yourself, try singing Bob Seger’s Night Moves replacing “moves” with “world.” That will provide more entertainment value than Nightworld, a lazy, plodding, pointless exercise in horror tropes, shot in Sophia, Bulgaria of all places.

When you think Bulgaria (if you think of it at all) it’s in the context of some direct-to-video horror show with Steven Seagal, a former action star with a head like a scrubbing pad.

Starring Jason London, who played Randall “Pink” Floyd, in Dazed and Confused, this is a pretty confused effort too (it’ll take a while to notice him too, and you’ll be asking, “how do I know that guy?)

He’s an ex-LAPD, Brett, who takes a security job in Bulgaria to escape the pain of losing his wife. Actually, throw in a few Chechen terrorists and this sounds like the type of rubbish Seagal would sign on for.

What is the gig all about? Who’s paying him? What is he supposed to be looking out for? He can’t get any answers anywhere. It’s a bit like Kakfa’s The Castle, except for the universal existentialism, timeless quality, or literary merit. So, you could say Nightworld is not like The Castle at all.

Brett is supposed to stare at a bunch of screens, and report to his superiors by speed-dialing “1” if anything happens. If such a conceit applied to Nightworld’s Netflix viewers, this button would be deployed oh, zero times.

He at one point summons (by speed dial), an old blind gent, Jacob (Robert Englund). It’s mildly amusing that someone new on a job that requires hyper-vigilance, summons someone unsighted to help out. Very mildly.

Apart from that, Nightworld deploys the usual old saws in horror, the creepy twins, the old house, the nightsweats…

One major debit: one of Brett’s employers, a supposed Bulgarian, is trying (and failing) to conceal a tough-guy, um…Guy Ritchie flick brogue.

If you’re wowed by mysterious CCTV footprints, this is the movie for you.

One thought on “Nightworld”