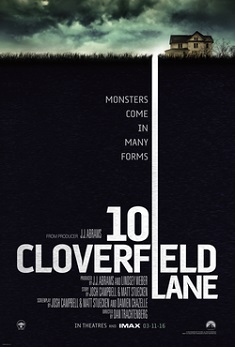 Every year one or two critic-friendly horrors come down the pike, which critics deign worthy of think-pieces and drench with (over) praise. In 2017, it was Get Out, and in 2016, it was 10 Cloverfield Lane, one of those “oh my, I’ve woken up and I don’t know the circumstances of how I got here,” kinds of horrors, a conceit that has built-in narrative steam that can power a film at least a third of the way through at least.

Here, it’s Michelle (Mary Elizabeth Winstead of Scott Pilgrim vs the World), who gets into a car accident in Louisiana and finds herself in a basement chained to a wall. For someone who’s been through that much trauma, she’s still (unbelievably) central casting pretty, bangs hanging just so, and as she reaches for her cellphone with her crutches, her lean trim body distracts from the plot.

Her appearance is a byproduct of 10 Cloverfield Lane’s slickness, a JJ Abrams co-production which could actually have benefited from a lower budget, considering it takes place in a subterranean bunker built by ex-Navy man, Howard (an incredible turn by John Goodman). Michelle finds she’s with a co-captive, John, a forgettable Tom Green-alike and together they’re informed by their captor, that he’s really their savior — that the external milieu has been poisoned by some kind of nuclear attack and that they’re stuck underground, indefinitely. Is he telling the truth? Or is he bonkers?

This is a dynamite idea.

However, the film’s pulled in so many different directions, none of which wields enough force* to consistently generate scares. Is it a Cold War throwback? An alien attack flick? A cloistered claustrophobic horror?

Director Dan Trachtenberg gamely keeps the audience guessing, but when the inevitable happens and the captured duo consider their options, it doesn’t generate the impact it might’ve.

[*Editors’ note: And as an aside, we’re sorta sick of how quickly film characters recover from a beer bottle to the head. That friggin’ hurts. It’s not the kind of thing that can be brushed off while you continue doing what you’re doing, especially swung with the force of Sammy Sosa in his steroid-abusing prime]