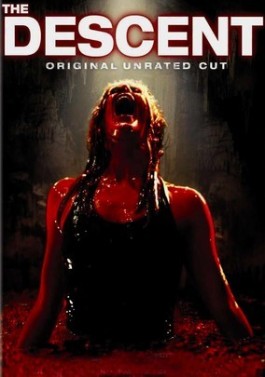 The Descent is bursting with Bechdel goodwill. But that’s neither here nor there. At the end of the day, this semi-gratifying spelunker thriller comes up short, regardless of what’s between its legs.

USA Today had an interesting take that’s more or less on-point: “For my money, [the] first 20 or so minutes are the best in the film. Once the real adventure gets underway in the cave, things get less interesting…”

Seldom is a set up as compelling as what we’re eased into here: On the return from an extreme sports adventure, there’s a grisly crash. The carnage spares Sarah (Shauna Macdonald), but kills her husband Paul and daughter Jessica.

A year later, a still-shaken Sarah ventures into the great outdoors for some dark adventures — literally — to explore caves with her mostly seasoned friends, Juno, Beth, Sam, Rebecca and newbie Holly.

They settle down to a session of carousing and boozing it up, heading out to explore once the fog of a morning hangover’s barely lifted.

One year later, Sarah and her friends Juno, Beth, Sam (MyAnna Buring), Rebecca (Saskia Mulder), and newcomer Holly (Nora-Jane Noone) are reunited at a cabin in the foothills of North Carolina for cave-exploring adventure. The next day, they hike up to a cavernous entrance and descend.

The Appalachian Mountains are a treat. It’s a darkly majestic bit of the world out there that director Neil Marshall faithfully reproduces.

As the group of friends descend into a metaphorical / literal hell, it’s claustrophobic and intense as only a cave can be, going over some of the same survivalist terrain as Danny Boyle’s 127 Hours.

The first part of The Descent is a gripping test of will, and overcoming of adversity through teamwork.

But it’s when the supernatural element rears its hissing head that this underground terror cools its jets as much of the action is shrouded in near pitch-black.

Man (or in this case woman) vs nature would’ve been plenty.

2 thoughts on “The Descent”