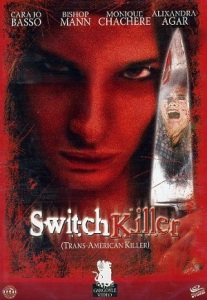 In the 90s GLAAD objected to The Silence of the Lambs’ Buffalo Bill on the grounds that the character was “a cross dressing, misogynistic serial killer.”

Cara Jo Basso is extraordinary as Jamie, a woman abused by and trying to escape from an obsessive idiot who is leaving her threatening voicemails and sending her flowers. And that’s pretty much it plot-wise. Switch Killer’s narrative is as skimpy as the outfits.

Jamie takes refuge at her grandmother’s place, a charming old-timer who’s moved to tears by Bogey in Casablanca. On the side, Jamie takes a job as a stripper, becoming romantically involved with an attractive colleague while explaining away her nightly absence to granny as “a job in the restaurant business.” Because we’re better than that, you’ll get no “job” yuks on this site. 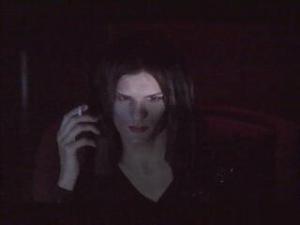 Switch Killer is a total grindhouse throwback, a film which has more in common with the likes of Maniac and Henry: Portrait of a Serial Killer than any of its 80s final girl progenitors.

Director Mack Hail is obviously well-versed in what makes the horror genre great.

It’s interesting to see a stripper played so sympathetically, and the use of the uber-sleazy Nevada hub of gambling and prostitution as a horror backdrop makes for some captivating visuals.

For a film that’s this (some would say) nonredeemable in its sordidness, there’s surprisingly not much in the way of gore. Sure, a few dancers are gutted like freshly-caught trout and shoved into oncoming trains, but the tension comes from the build-up and the highly realistic depictions of the strip club scene (don’t ask how we came by this knowledge).

As is often the case, didn’t expect much from the title; Switch Killer delivers in spades, and all for a modest budget.

As for as depictions of the transgendered…well, this ain’t Dallas Buyers Club.

One thought on “Switch Killer”