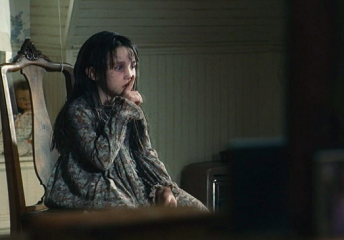 Anytime someone sees something in a horror film someone else cannot — that’s fodder for fright, whether it’s a chimerical figure, a portal to hell, a creature in the woods, or yes, imaginary friends.

It was once a consensus in psychiatric circles that kids (it’s usually kids) with imaginary friends were mentally disturbed introverts who need some sort of intervention.

University of Oregon developmental psychologist Marjorie Taylor has studied the phenomenon for decades and says it’s “fascinating that very young children…can have the capacity to create a friend, that they can derive real comfort and support from, that they love.”

You won’t find such friends on this list, as horror movies (bless ’em) have yet to catch up to the research regarding the prevalence / harmlessness of imaginary friends. So, without further ado (as we’re receiving counsel from a strange figure lurking in the shadows) here are a few Horror Movie Imaginary Friends:

8. The Imaginary Boy in The Conjuring:

In James Wan’s The Conjuring, a Rhode Island couple and their five daughters move into a decrepit farmhouse whose threshold their dog won’t cross, and which also has a creepy boarded up cellar.

Despite having three very obvious strikes against the property, Roger and Carolyn Perron don’t call U-Haul and get the hell out. Then again, if sound judgement were rewarded, the horror genre would cease to exist entirely.

Sure enough, there’s bad Mojo at this abode, and dark bruises begin to appear on mom’s body. Then, one of the daughters strikes up a friendship with an imaginary boy, the house begins to quake, and paranormal investigators are summoned (among other things).

7. Kids in The Orphanage:

In this Spanish horror, Laura, a former orphan, raises her adopted son Simón (with help from husband Carlos) in an old house and former orphanage where she was raised.

Soon, the kid discovers playmates—not the good kind that bring you warmed hors d’œuvres in Hefner’s grotto—but imaginary ones who involve him and his mom in a dangerous game which ambiguously plays itself out when the kid goes missing and psychics are hired to track him down (never a good option, even as a last resort for the very dumbest of the dumb police departments).

True crime writer Ellison Oswald (Ethan Hawke) walks around in a cardigan. That’s a crime in of itself, if only of the fashion variety.

But he’s great, and Sinister is a mostly commendable supernatural horror. It’s comparable to The Shining in that a writer and his family move out into the wilderness and the scribe lets his psyche get the better of him.

Soon, his son is experiencing night terrors and depicting the backyard hanging in his art. Then, a sinister ghost appears as daughter Ashley’s imaginary friend, getting her to scrawl a picture on the wall. The mystery deepens, and we soon find out it involves the puzzling “Mr Boogie,” which sounds like a deep album cut by Bootsy Collins.

5. Ivan in The Machinist:

The workforce in this Christian Bale film really need to unionize, as this place has occupational health and safety standards south of your average Victorian textile mill.

Bale plays a machinist named ‘Reznik.’ (Incidentally, that’s Czech for “butcher”, a term that you won’t require backpacking through Prague unless you want to lug a rack of lamb up to your hostel.)

Like Brad Pitt in Fight Club, Bale altered his appearance considerably for the role, shedding some 60 lbs’ worth of normal acting in favor of the method kind.

Reznik is a sleep-deprived machinist lulled into a state of negligence and complacency by a creepy co-worker, the grinning “Ivan”. Alarm bells go off when it is revealed that the company has no record of any such worker and the viewer begins to wonder if the electricity powering the machines in the film might also be used for shock therapy on our delusional protagonist. Distracted by a grinning digit-deficient Ivan, Reznik unwittingly powers up a saw, which results in another co-worker no longer being able to hail a cab, nor flip anyone the bird.

4. Captain Howdy in The Exorcist:

The Exorcist did more for puking, spinning and hallucinations than untreated alcoholism.

“Captain Howdy” sounds like the world’s second creepiest children’s TV character (Mr McFeely of Mr Rogers being the first) and is conjured up by Regan’s mother on a Ouija board. A psychiatrist asks to speak to Captain Howdy:

Incidentally, Captain Howdy is also the name of the most popular Exorcist fan site. 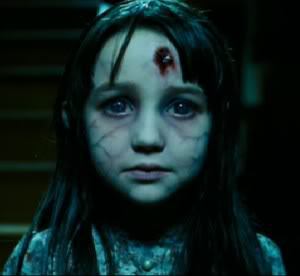 3. Jodie in the Amityville Horror:

Some see a notorious property as a buying opportunity, where you can sweep in, low-ball the agent, give the place a good scrub down and remove all the bad vibes and hanging plants. The more passive approach—leaving things the hell alone — is luckily not the preferred course of action people take in horror films, who also, try as they might, can’t help but trust the guy with an impossibly large collection of pickled insects who runs the gas station.

The Amityville Horror is based on the true story of serial killer Ronald DeFeo and was adapted from a novel by Jay Anson, who did for the town of Amityville what Truman Capote did for Holcomb, Kansas—except without the witticisms.

A couple move into a Long Island home where the murders took place and make the fatal mistake of not calling in an interior decorator and adding, say, a nice peaceful aquarium to the killing room. Their daughter develops a relationship with a sinister imaginary friend “Jodie”, whose eyes glow red, and who recounts tales of the house’s nasty history.

A whacked out teen sleepwalker is tipped off that the world will end in 28 days by a giant rabbit, Frank, who convinces him to commit a serious of increasingly violent acts, the first of which is flooding his school by taking an axe to the water main and also embedding said axe in the bronze statue of a bulldog, the school’s mascot.

When it comes to imaginary giant rabbits (there’s a sentence you don’t get to write everyday) of course there’s the Jimmy Stewart vehicle, the 1950 comedy-drama, Harvey. Donnie Darko director Richard Kelly, claims to have not seen it.

The killer who’s escaped from an insane asylum has become a cliche in the slasher world, and his presence is usually announced via some radio dispatch.

However, it’s what’s inside the mental hospital that presents an interesting opportunity to depict an institutionalized horror, the very real frights associated with what in hindsight seem like barbaric practices when it came to treating people with mental illness.

This includes the infamous lobotomies and psychosurgeries popularized in the 1930s, referenced here in flashback, as Session 9 focuses on a five-member Massachusetts asbestos hazmat remediation team hired through a low-ball bid to clean up a shuttered asylum.

The film stands apart as one of the most ruthless and jarring representations of bedlam ever committed to film, shot in Massachusetts at Danvers State Hospital, also known as the State Lunatic Hospital at Danvers.

When the ghosts of Danvers are present, it adds a level of heartbreak and realism to the film. Metaphorical ghosts, that is. The residents of Danvers are very present, in tales the grounds’ security guard tells about de-institutionalized patients returning to the grounds as they had nowhere to go and stories of repressed memory syndromes and sexual abuse. The most affecting moments come from a long-time resident with multiple personality disorder, Mary Hobbes’s voice, heard via a psychiatrist’s old reel-to-reel, in which she tells the doctor about her three friends, which only exist in her mind. 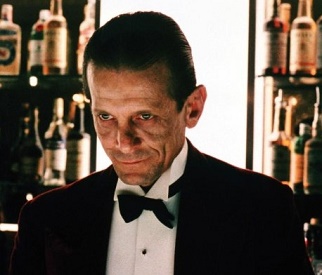 1. Tony and Lloyd the Bartender in The Shining:

Creepy kids with imaginary friends is a horror film cliche up there with the hick sheriff who warns prophylactic-preoccupied Spring Breakers that there are strange doin’s out in the woods other than the doin’s Spring Breakers do to each other.

The top dog when it comes to kiddies with bad, bad made up friends, is The Shining.

“Tony” is Danny Torrance’s imaginary friend who, among other things that no doubt contributed to shunting him off to the child psychologist, makes him spell out words in lipstick.

Hated by Stephen King (who was instrumental in remaking The Shining as his own version—hated by everyone else) The Shining is visually stunning and a frightening isolationist exercise, with poor Scatman Crothers done in just like black folks always are in these types of films …

Another imaginary character from this film is Lloyd the Bartender, who is overall a pretty positive influence as you wouldn’t have to tip a hallucination, or for that matter, need to worry about getting cut off.

[Don’t forget to check out the Really Awful Movies Podcast, and pick up our book, Death by Umbrella! The 100 Weirdest Horror Movie Weapons]