Foreign horrors often benefit from cultural unfamiliarity. Bunny the Killer Thing (2015) is one such film. Not that it’s unwatchable by any means, but it carries with it a kind of societal advantage of not being set on these shores, upping the interest level that might not otherwise have been there.

A raunchy Finnish horror/comedy (with English and Finnish breezily interspersed), Bunny the Killer Things brings the fun + gore, while suffering from laughs lost in translation. But that doesn’t mean it isn’t an interesting viewing exercise, if only to get a better understanding of Finnish culture — one that’s more holistic than you might glean from watching an NHL game.

Tuomas, a pant-pissing hipster whose face is bisected by a very punchable mustache, has a rich uncle who’s offered him use of his fancy cabin in the woods. Yes, this is a cabin in the woods movie, replete with the trappings of Finnish culture (it’s got saunas, and clear spirits are the go-to beverage choice).

En route to their wintry getaway, Tuomas and friends come across a car that’s broken down, driven by three, somewhat seedy Brits…however it’s not one of THOSE kinds of movies. 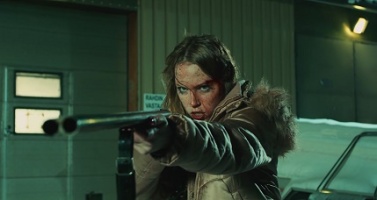 Back in town, a mad scientist has injected an unwilling patient with a serum, and he’s busted loose from his confines possessing….not er, superhuman strength but large furry rabbit physicality (while retaining some parts of his human anatomy intact, for some, shall we say “interesting” POV shots).

This hare/humanoid thing escapes into the dark woods, then goes after the Finns, as well as their newfound British compatriots, and they have to band together to tackle the sicko bunny.

This sounds like a pretty straight-up creature feature, but this is bawdy stuff. And even if this is Nordic, the tone is really all over the map.

The leads are dynamite though, particularly Jari Manninen as Mise, an N-bomb dropping bigot who soon becomes fast drinking friends with Nigerian-Brit Tim (Orwi Manny Ameh).  Their relationship is sweetly unexpected. The female leads are great too, including Veera W. Vilo as the conniving Nina, and her unrequited love interest Sara (Enni Ojutkangas).

Park your brain in neutral and go with it.

[For those who are interested, on Episode 38 of the Really Awful Movies Podcast, we chat about the killer bunny feature, Night of the Lepus]

2 thoughts on “Bunny the Killer Thing”