Fine, so the SF Gate pointed out Primeval bears superficial resemblance to both those films, but they didn’t make their lede a rhyming chant.

The year 2007 was a banner one for killer croc movies, as the Aussie creature feature Rogue was released that very year as well. That one wasn’t half-bad, but then again, it wasn’t half-good either…but it was a reasonable time-waster and looked decent enough, kinda like throwing on a blazer over jeans to dine out somewhere fancy. And it followed the cardinal rule of killer critter movies: if you don’t have much $$$, for the love of all things holy, don’t show much of the creature.

Primeval was “inspired by the true story of the most bloodthirsty crocodile ever.” (don’t you love it when billion-year old instincts are anthropomorphized? Maybe he’s not really bloodthirsty, but just hungry? After all, it’s a 25-foot apex predator…you try filling that gut to satiation)

However don’t let that poster tag line throw you. This is a movie with aspirations.

Primeval is set against the backdrop of the Hutu and the Tutsi ethnic strife that’s more commonly associated with neighboring Rwanda, but which caused the death of one-third of a million people in this small East African nation of Burundi.

A New York news organization, sends a TV journalist (Tim, Dominic Purcell) to the region to report on the yes, real-life attacks by one Gustave, a septuagenarian croc with a body count that’d shame Jason Voorhees (For a little context, please see the ominously-voiced documentary Gustave – The Giant Crocodile of Burundi). Along for the ride, a reporter, Aviva, best-known for doing cat expose stories. But hey, we’re fans of Italian cannibal films and the motivations those characters have for traipsing around the bush in the middle of nowhere, are far more nebulous. And if NY news outlets have such deep pockets that TWO journalists are required for this mission, in the height of the decade that nearly sunk the journalism profession, who are we to question the dedication to their craft? 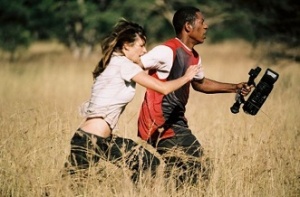 The crew’s cameraman is Steve (Orlando Jones) and Aviva (Brooke Langton) runs around with her tummy showing, demonstrating the nearly hard-and-fast rule that anyone named Brooke is good-looking. The jury is still out re: “good-acting.”

A group of surly hunters (one of whom is played by Jürgen Prochnow of the indelible Das Boot) try to bait the ‘gate, er, croc, with a dead goat hanging in a giant cage. But after dining on live humans, it hardly seems fair that Gustave would have to lower his standards to the Hamburger Helper of predation, a smelly, decaying ruminant.

The crew has to deal with something nearly as sinister as giant, hungry, scaly, bullet-ridden Gustave roaming Lake Tanganyika. And that’s Little Gustave, a sadistic warlord.

At the end of the day, this is tepid stuff but hey…this might be the best Burundi-set feature this reviewer’s ever seen.