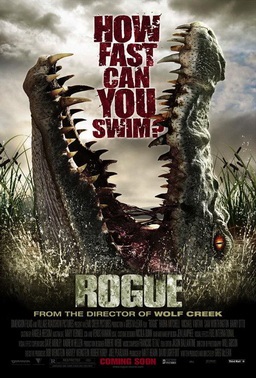 “A steam train with teeth,” is as vivid image as any to describe a man-eating crocodile. (Whenever you hear the phrase man-eating it conjures up the geek shows of yore, “come see the man-eating chicken!”, which ultimately disappointed/amused as merely a man…eating…chicken….)

Rogue is an Aussie animal attack creature feature, wherein a Chicago travel writer digs deep to find the hero the cubicle-dwelling freelancer never thought he had.

Relatively well-made, well-shot, well-acted, and well-written, it’s a production that is above the material, and that’s saying something, as apart from Alligator, most of its scaly brethren (think Komodo, and The Curse of the Komodo to name two that laid an egg), stink.

That being said, this reviewer was in the mood for something a bit gorier, cornier and more Corman-y, even if the croc is pretty cool.

Here’s a pretty good movie maker mantra: “When you don’t have much, don’t show much” and director Greg McLean wisely focuses on the tension and the storytelling rather than the creature, which is about as scary as its namesake footwear.

In Rogue, vacationers aboard a flat-bottom boat in Kakadu National Park in the Aussie outback, are set upon by a giant and seemingly insatiable beast with a taste for human flesh (and really, it is insatiable. For a creature not so altogether large as to be out of the realm of physical possibility, it certainly keeps feeding…and feeding and feeding).

This attack croc flick was recommended to us by film critic Mike Mayo, with whom we discussed the phenomenon of animal attack movies on our podcast.

It’s a favorite sub-genre of horror we’ve devoted a lot of time to, both in written form on this site as well as recorded (we’ve variously chatted about Night of the Lepus, Shakma, Monkey Shines, Slugs, Slither, Day of the Animals and there’s many more where that came from as seemingly every single species of the Animal Kingdom regardless of how utterly ridiculous — killer rabbits? — seem to have a special section of genre purgatory devoted to them).

In Rogue, there’s some bona fide tension created when the boaters attempt to zip-line their way to freedom like some American Ninja Warrior survivalists.

An extra half star were it not marred by, how shall we put it? Excessive heroism.