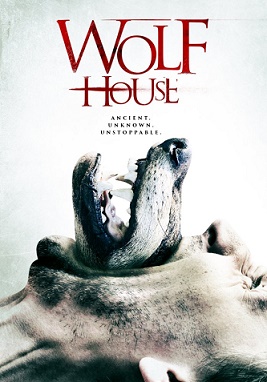 Homo homini lupus est.* Why, oh why, do filmmakers have to subject us to herky-jerky terrible found footage movies like Wolf House? Well for starters, they’re cheap as heck to produce. And storyboarding them isn’t as rigorous.

Found footage/documentary-style films are highly polarizing. After all, the notion that people’s lives are so unimaginably compelling that every single second of their existence absolutely has to be documented by some idiot…well, that’s a tough sell, even to the most battle-tested reviewer who’s sick to his eye teeth of up-nostril shots.

And that’s not to say the odd found footage film isn’t decent. It’s a bit like the occasional salmon that survives a spawning run. When it comes to Wild Eye releases in particular, Head Cases: Serial Killers in the Delaware Valley is an adroit, if flawed, piece of work and worth a watch.

Wolf House, though, is a slop bucket of genre cliches: the “put that damn camera down!;” one character doing a mock David Attenborough wilderness voice-over; the night vision view that focuses on friends and what might be lurking in the dark; and of course, a guy so worried about his pending demise that he records a message he thinks will be viewed posthumously (subjecting the poor detectives to hours of solipsistic garbage and dizzying camerawork).

The Wolf House narrative is simple. Friends go missing in Niagara County, Upstate New York. And this is their story.

The setup is “cabin in the woods.”

Everything’s going splendidly, and one of the guys, who looks like a linebacker Travis Bickle, proposes to his girlfriend who’s described as a “real looker.”

One morning he shoots a creature that’s not a bear but what could either be a Sasquatch or “the last surviving Bigfoot.” And then things go predictably haywire.

There are doubled up references to Harry and the Hendersons as well as to Steven Spielberg (jeez, if your conceit is that the guy obsessively documenting the proceedings is a budding filmmaker, at least craft a few decent camera shots!).

Also, Wolf House uses split screen, but Annie Hall this ain’t. In fact, it’s the only time where there’s respite from motion sickness. And even THEN it’s a useless conceit, as the split screen is for, get this, a TRANSCRIPT of a 911 call. “Caller, what’s your emergency?” “Another bargain basement turd of a found footage film. Send help immediately!”