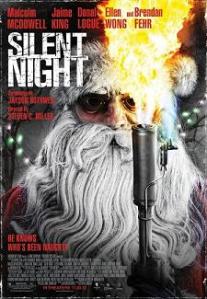 The first vic gets zapped to death — long before a public service announcement warning of the dangers of Christmas lights can save him.

The Christmas season is upon us, so welcome to the seasonal horror Silent Night.

‘Tis a killer jolly elf movie where the killer is less than jolly, but gets his jollies building up an impressive body count in a random American town, finely portrayed by the geographical center of Canada, Winnipeg (and also Selkirk, Manitoba).

The killer Santa wears a creepy translucent mask and employs a variety of distinct and unique weaponry, from the aforementioned Christmas lights to an ax, a scythe, brass-knuckles, a wood-chipper (a la Tucker & Dale Vs Evil) and also, a flamethrower. (The latter conjures up George Carlin’s genius: “The very existence of flamethrowers proves that some time, somewhere, someone said to themselves, ‘You know, I want to set those people over there on fire, but I’m just not close enough to get the job done.'”) All kidding aside, the arson plot points were inspired by a real-life massacre that took place in Los Angeles, probably not in the distance enough past to justify it, but there you go.

Relentlessly sleazy (goes without saying), Silent Night includes a topless chase through a Christmas tree farm and a swinging hook castration of a nudie photographer. What the flick has going for it though is self-awareness, a pretty competent script, as well as some pretty terrific performances.

Donal Logue (Gotham/Law and Order: SVU) is dynamite as a cussing, cynical Santa Jim, and the ever non-discriminating Malcolm McDowell spouts non sequiturs as the town sheriff. 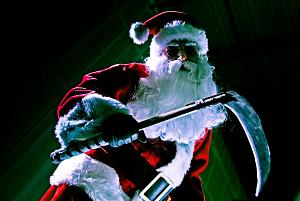 Naturally, there’s a righteous minister sounding off about sin, and in a funny / creepy scene, warning of the dangers of American Idol (even the secular among us will concede that one. Although it could be argued The Voice is the embodiment of true evil).

Things get all police procedural toward the end, with a few felt-red herrings thrown in, and at times Silent Night borrows some of the lazier aesthetic elements of Criminal Minds.

Still, for a killer Kris Kringle fix, you could do worse in terms of Christmas horror movies.

One thought on “Silent Night”