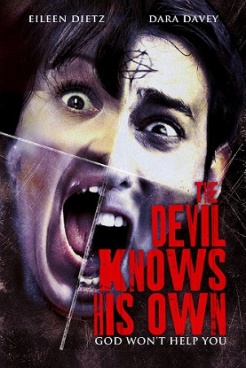 If micro-budget horrors like The Devil Knows His Own are to be “rescued from the dominion of darkness,” [Colossians 1:13] their trailers need to be short, tight and on-point. Bad trailers are sins least likely to be forgiven (and the poster ain’t so hot either).

It’s an impressive feat to generate 165,000 YouTube views, but not if the conversion rates are lousy and the up to down-vote ratio is almost 1:1.

A 56% YouTube approval rating does the finished product a disservice, as while it’s by no means a masterpiece, there is undeniable visual style for 50K in The Devil Knows His Own.

Ethan (Patrick D Green) is a leather-clad rocker living the trappings of the rock star life. He swigs whisky from a flask in the AM (we’ve all been there) and answers the door to his hotel room nude (no comment), giving the maid a stir while his entourage does blow and stumbles to the tour bus barefoot in nothing but their underwear.

His lesbian sister Jess (Dara Davey), who looks a bit like BC punk rocker Bif Naked, is getting their recently passed grandma’s affairs in order. And wouldn’t you know it? The executor of her will, Nathaniel, announces that the old lady has bequeathed the siblings her house…which has furniture covered in plastic like she was Italian. (If you don’t believe that’s a thing, search memes.)

Ethan and Jess reunite after a long time not having seen one another (he’s a “famous rock star”) and decide to stay at the abode with their respective girlfriends.

Lawyer Nathaniel is unlikely buddies with a priest, Levi, so the man of the cloth can add some exposition in the form of: “The house…is evil!”

There’s definitely bad mojo there, as the siblings were abused by mom and grannie, who stapled creepy masks to their faces if they misbehaved.

Films like The Devil Knows His Own have to be compared with their low budget brethren, as it’s rare that a breakout classic occurs with the dollars invested at this level. Rare, but by no means impossible.

However, there are two major, almost insurmountable flaws:

1. During the funeral service, you can see granny moving in her coffin…and

2. Why stay in a house that has bad memories associated with it? The latter could’ve been easily explained away as a financial need. However, early on Ethan says he doesn’t need the money and it’s made clear Jess is going to sell.

Then again, if people didn’t know what was best for them, there’d be no haunted house genre to speak of.

Still, on the cheap, The Devil Knows His Own offers a few pretty decent scares and good atmosphere, especially the creepy basement and the gripping childhood flashbacks.