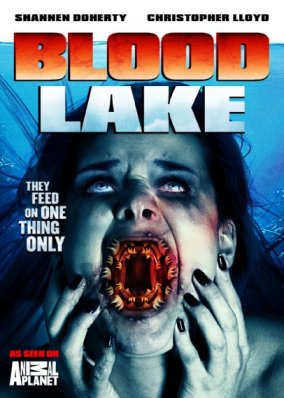 “Enjoy all that summer has to offer in Michigan!” This, as Blood Lake begins with an aerial shot of a California mountain range with palm trees aplenty. At least wait until PAST the 15:00 minute mark to Ed Wood us, people. Jeez Louise.

The lamprey population in a local river, “is way above normal.” What’s below normal is the script, which is lazy, gutless and joyless (or um, jawless given the creature in this feature).

It’s peppered with simmering repartee like: “Is that your brother? He looks happy!” This is a a remedial screenwriting ploy to get boyfriend and girlfriend, who should be wholly indifferent to the needs of an 8-year old, to pay attention to the cute little tyke playing on the beach…as something sinister is about to happen.

But Jaws this ain’t. It’s not even an Orca.

Blood Lake lurches from scene to scene like a flatbed stuck between gears.

And lest you think the players are above the material…

Michael (Jason Brooks) is a wildlife officer and his wife Cate is Shannen Doherty, of 90210 infamy. Kudos to the practical effects team for keeping her this well-preserved. The mayor of the town is Christopher Lloyd, the indelible Reverend Jim from Taxi and it nearly goes without saying, Doc from Back to the Future…and he’s bloody awful.

No A for artistry, no Lampr-A for effort. That sad little pun is a tribute to the invisible-to-the-naked-eye level of creativity that went into the project.

Officials need to fix dam turbines to keep the invasive species at bay, as certain varieties “can be very aggressive.”

Lampreys soon lay waste to the townsfolk, as they aren’t the passive parasites those of us who live on the Great Lakes have come to know and loathe. They slither about quite quickly and the grudging one star below is for the decent CG effects.

While lamprey populations balloon, it seems like we in the natural horror world are running low on aquatic attack species. Excuse us as we retire to our laptops to hammer out the definitive sea anemone feature. It’ll be called Public Anemone Number 1. You heard it here first people.

F*ck off everyone involved with Blood Lake: Attack of the Killer Lampreys, except for maybe craft services, drivers, makeup and grips.

Easily one of the worst horrors you’ll ever see.

1 thought on “Blood Lake: Attack of the Killer Lampreys”