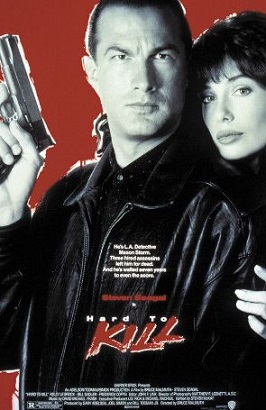 “Gonna take you to the bank…the BLOOD bank” sounds like it’s straight from the marble mouth of Rainier Wolfcastle, but it can only be one man — Seagal. He’s Hard to Kill. And hard to miss as well. He’s the real “Il Divin Codino,” or “divine ponytail,” the nickname bestowed upon Italian soccer hero of lore, Roberto Baggio. His magic mane contains all his combined sure-shot / martial arts / Lothario powers.

Here, everyone’s favorite ethnically ambiguous aikido low-talker is kicking ass and taking names (and also fact-checking those names against a database, and kicking those people’s asses again just to be certain).

And if you’re gonna kick ass and take names, what better name to have than MASON STORM????

Hard to Kill is the apotheosis of moron 90s ass-kicking action films, where a svelte and shockingly lithe Steven is a hard-bitten LAPD detective.

Much like Chuck Norris’ The Hitman, Storm is attacked and left for dead…and he makes a near-miraculous recovery, but not before morphing into Rasputin the Mad Monk while lying in a hospital bed. (What? they don’t cut patients’ hair who’ve been in a coma? What kind of long-term care facility is this?)

Luckily, nursing him back to health is none other than Kelly Le Brock, Seagal’s then wife.

When he comes to, and not realizing what presidential administration is in power, he does what many an action hero is compelled to do: go through an elaborate training montage set to piercing vibrato guitar.

Back in fighting form, he tracks down the mob bag-men and corrupt cops who tried to do him in (and there’s a subplot with his son, but who gives a crap about that really?) And naturally, he gets help from a partner cop everyone in the viewing audience knows is doomed to eat lead.

This is where we get Seagal in limb akimbo aikido mode. Every third-rate henchman better watch out for some leg sweeps as Storm is kicking up…a…well…Storm.

It’s sad what Seagal’s become: barrel-shaped and sounding like he’s born in the Bayou instead of the south — of Michigan. We’ve subjected ourselves to Submerged and Half-Past Dead (two films that accurately describe his latest career choices) and regretted both. Here though, however, it’s full bore Seagal assault mode. And Hard to Kill has the greatest acupuncture scene in cinema history.

2 thoughts on “Hard to Kill”