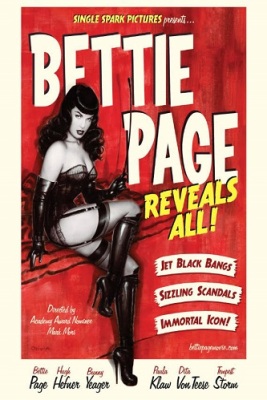 “Oh my, you’ll never do as a fashion model.”

That was according to Ford Modeling Agency founder Eileen Ford, but Bettie Page was told she’d make a good pinup model, by of all people, a Brooklyn cop out in Coney Island, who proved to be a much better judge of talent. So much so, in fact, he suggested she mask a high forehead with bangs. Bingo. Her trademark look that she never abandoned. And the rest is history.

And Page’s history is riveting.

Born to a mother with a third grade education in The Music City, Nashville Tennessee, and a “sex fiend” father who abused her and her sisters, she was shunted into a foster home when her mother fled and was unable to care for her and her five siblings.

A relentless book-hound, Page excelled in school, married (and later divorced) a military man and moved to San Francisco and then New York before finally becoming a successful model at the advanced age of 27. Much like Latino boxers, whose ages are frequently, “adjusted” according to circumstances, the young-looking Page was perpetually referred to as “22.” “Let ’em think what they wanted to!” She was 22 for a long time.

Page became a regular fixture on the Jersey camera club circuit and also on Fire Island, New York — camera clubs being the only means for some men to actually get that close to someone wearing so little. She earned the princely sum of $25/day.

Authority figures play a recurring role in Page’s life, from her “talent agent,” the beat cop, to her first husband in the military (servicemen being the primary audience for her work) and then to Brigadier General who did a notorious nude photo shoots with the pin up icon; and finally, morality police busting the camera club photo shoots for indecency.

The 50s were a different time altogether, but Page’s beauty was timeless and she’s a terrific narrator here, her Tennessee drawl and good humor much more effective than a usually ponderous documentarian.

Her trademark look continues to inspire, even if her current tough-girl disciples in roller derby leagues and tattoo parlors all over the world, mostly lack her most notable features: vulnerability and accessibility.

And it’s easy to forget that one of the most beautiful women of all time, a one-time bondage queen, was also someone who cultivated  so many different interests (she designed and made her own bikinis and lingerie, went to Bible College and pursued a Master’s Degree at Vanderbilt).

She led many more lives than could ever be captured in 90 minutes.

2 thoughts on “Bettie Page Reveals All”