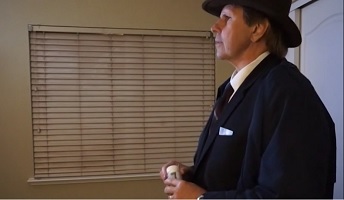 Like a salesperson, a filmmaker has to sell a premise. On this site we reviewed a really intriguing UK indie thriller called The Profesional (one “s”). In that one, a “cleaner,” or government-sanctioned hit-man, is the subject of a documentary. In exactly what kind of society a public servant would do this kind of work is never really explained. But it doesn’t matter.

In Door to Door, the viewer’s asked to buy an even odder conceit: a door-to-door salesman peddling pills. His goods aren’t vacuums or time shares but a pretty big conceptual stumbling block. Someone in a fedora + ill-fitting suit producing prescription bottles from a suitcase would spur slamming doors and a call to the cops (even if he does resemble Harrison Ford). The way to avoid this would’ve been having the victims ordering their materials online and expecting the pitchman’s arrival.

The mysterious huckster’s sinning customers each have something to do with one of the Seven Deadly Sins (or technically, “capital vices,” at least in Catholicism). The salesman’s goods are a kind of antidote to people’s “spiritual weakness,” causing them to undergo traumatic learning experiences. (This film was cleverly released during Lent.)

One character, a brooding wife-beater-wearing alpha (whose conduct unfortunately matches his attire) is convinced to chug some pills with a front porch pitch. He’s subsequently menaced by demonic figures in a junkyard, lead by a WWE-like antagonist, “Anger” (not Wrath).

An obese girl, Katie, is approached about “reaching her potential,” by way of a pill panacea that will make her leaner and allow her to dispense with those “fake dating profiles” online.

This is a 60-minute indie film made for $6,000, so one can’t accuse first-time filmmaker Jimmy Weinholz of greed.

And it’d be prideful on our part to really take Door to Door to task too much over its numerous faults; but by the same token, we’re honest reviewers.

Door to Door has a bunch of sound issues and other unfortunate oversights (pit stains and the lead character’s noticeable “bad take” laugh left in the finished product). Anger’s speech is rife with goofy exposition. The first sin isn’t obviously a sin, so without having read the premise in a press release, one wouldn’t necessarily know. And finally, a salesman entering someone’s bedroom without getting a good pepper-spraying beggars belief.

There’s a really neat harpsichord score and a few solid frights though. We hold people in high regard who go out and make art, regardless of the outcome. It takes a lot of guts and commitment to go guerrilla style. Door to Door isn’t a bad launching point.