Christmas Slay proves that the pen is mightier than the sword, especially when a bunch of them are plunged into the anterior of the skull.

This UK production didn’t arrive under the tree in time to make our 13 Christmas Horror Movies list, but it would be a welcome addition as Slay has a slew of innovative death scenes like the one above.

This is an homage to killer Yuletide films of yore and for our money pretty darn fun, and a better Killer Santa bet than say, Santa’s Slay.

Christmas Slay’s sack bulges with every cliche imaginable, with director Steve Davis seemingly determined to slip every terror trope into every frame — complete with deranged groundskeepers to headphone jump scares, the “surprise” arrival of guy party interlopers, an escaped lunatic, a hot tub and even a nod to infamous deaths in House on Sorority Row and Curtains.

But it’s basically a cabin in the woods movie. 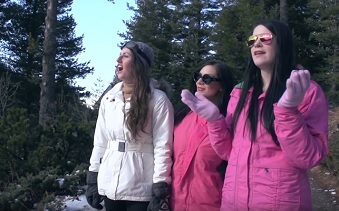 Three 30-something women head to the wilds of a barely snow-covered Scotland for some Christmas Eve R&R (in case you were wondering, and this reviewer was…their parents all happened to be on vacation abroad, freeing up the ladies’ social calendar, k?)

Speaking of far flung locales, it’s easy for North Americans to take our large land mass for granted in horror. A few hours outside of any major city and you’re miles from civilization, whereas the entire UK fits into our home province of Ontario four times. So it’s hard to accept the conceit of even the spare Scottish Highlands here being in the middle of nowhere (Bulgaria was actually used as a surrogate).

And about those three women?

This census isn’t high enough to sustain the kind of body count we’ve come to expect from 80s-style slashers so luckily, their reluctant friend Chloe joins them along with their beaus. At the end of the day, increased mortality rates go a long way…

The film features that fun staple of slashers, a gory prologue, and like its genre brethren, there’s nice eye candy and the performances are all over the map (though Frank Jakeman cuts an imposing figure as the sadistic Saint Nick).

There’s fun, booze, frolic and even a montage snowball fight — not as fun as Bill Murray flinging slush balls in Groundhog Day — before the slaughter sets in. Even if you feel like you’re reliving the same movies you grew up with in the 80s, Christmas Slay is comfortable wool sweater déjà vu.

Watch the film on Amazon Prime