Cop Car wears its influences like a decal. The premise, straight-up film noir: what to do with a dead body.

Kevin Bacon is the corrupt sheriff burdened with that very task, but Cop Car is more about two scamps than it is about moving a body. Runaways Trevor and Harrison are industrious 10-year-olds trespassing through fields in the US Southwest, trying to outdo one another with foul language and trying to pass the time as “nobody’s gone looking for them yet.”

They soon stumble upon the police vehicle the sheriff had to suddenly abandon.

“Dare you to touch it,” is the gauntlet thrown down by one, but they let youthful exuberance get the better of them and get behind the wheel of the cop car. Soon, they’re hightailing it through the fields like a couple of Dale Earnhardt Jrs, breaking down a gate with the front-end in order to get out to the main drag to see what that baby really can do.

Because we’re in noir territory (or neo-noir), even with kids as protagonists, it should come as no surprise that things spiral out of control.

This happens when the joyriders spot the cache of weapons inside and the duo lurches out onto the freeway. Goading one another to see if they can reach new highs on the speedometer, they’re in an instant game of chicken with a local, who notifies the authorities when she’s nearly driven off the road. 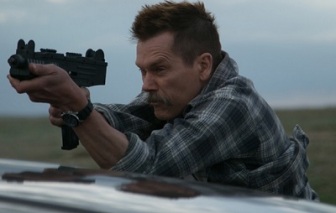 With the law tipped off, soon the nasty sheriff has bigger fish to fry than devising a killer alibi and has the boys in his sights.

While not as red herring-resistant as say, Sam Raimi’s exemplary A Simple Plan, Cop Car is never dull.

Bacon is terrific as a nearly unrecognizable dimwit. He’s decked out like My Name is Earl on casual Fridays, complete with a wife-beater and a mustache that has this Cop Car driver in Cop Land territory when it comes to facial hair.

But it’s really all about the kids. James Freedson-Jackson and Hays Wellford acquit themselves very well and are clearly having a joyous time of it. And who wouldn’t, given the circumstances (at least initially)?

Cop Car is a noble effort, even if it does go off the skids toward the final quarter.