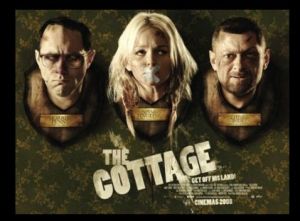 Two bickering brother kidnappers argue about tea and bugs while at, well, The Cottage.

One nebbish (“I don’t like lying!”) and one self-styled tough (“stop whining and sort yourself out”), have kidnapped a blonde hottie Tracy, who’s been knocked out with chloroform and is snoozing in their trunk.

After she comes to she head-butts one of them smack dab in the kisser breaking his nose, the brothers argue about the finer points of putting the fear of god into someone clearly fearless: “You couldn’t scare a child in the dark!”

They phone her father demanding a ransom and her step brother, with whom they’re in cahoots, agrees to deliver the bag of money: one problem, it’s all tissue paper. This puts the son’s life in danger as the hostage’s father is an underworld figure who runs a strip club (perhaps not someone you’d be too keen on extorting, but why quibble?)

In this Hitchcockian black comedy farce, Tracy soon frees herself from her captors and they’re chasing her through a hick hamlet in Yorkshire. Soon soon they all have bigger fish and chips to fry: there’s a deranged disfigured farmer, holed up in a creepy farmhouse who’s fashioned masks a la the family in The Texas Chainsaw Massacre.

Soon, the criminal element is running for their lives, getting its comeuppance and their captive is…well…we can’t spoil too much.

A genre film caper combined with a straight-ahead slasher this is an odd duck, IMDb critics have complained that The Cottage has a foot in two camps.

However, cracker-jack dialogue (one of the kidnappers, Reece Shearsmith, played Mark in Shaun of the Dead) and irresistible energy keep things humming along. Plus, there are amazing things done with pickaxes. A bloody good time.