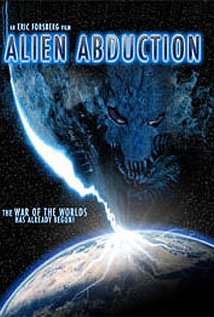 Cracked has an amusing piece called 5 Annoying Trends That Make Every Movie Look the Same. The premise is that movies are digitally color-corrected by genre, with desert movies being yellow, reality-distorted ones green and of course, horror and sci fi, blue. The Ring, Saw and the Nightmare reboot were cited and you can easily throw in the likes of the dreadful Clive Barker adaptation, The Midnight Meat Train, and now Alien Abduction.

To be fair though, when reality is distorted, Alien Abduction turns green. A foursome (two guys, two girls) is out camping in California and the girl (Jean) captures what she thinks is an unidentified flying object on her video camera. As she’s showcasing the dailies, as it were, to her friends (who remain unconvinced), they’re set upon by dreadlocked Predator creatures. While inexplicably rolling around in what appears to be garbage bags laid out on the hillside, the campers are abducted.

Jean (Megan Lee Ethridge) comes to in a mental hospital run by the US military, whose mandate is to brainwash patients so they can be safely reintegrated into polite society. This is done by first torturing them apparently, with the strains of the folk ballad staple, On Top of Old Smokey.

It’s overseen by a leggy British major, who barks queries like, “don’t you want to serve your country?” (Why a soldier from East Anglia is involved in a top-secret operation indoctrination campaign of abducted US citizens is never explained, nor is the major’s penchant for short skirts). Jean’s relatively unscathed by the events surrounding her kidnapping but her friends are now drooling invalids.

The patients at the facility receive central vac electro shock therapy that is admittedly pretty gory and grotesque. There are sped-up images of people shaking. There are vials with creatures. The resourceful Jean manages to escape while disguising herself as medical personnel (as an aside, it’s always amusing when high-level research facility security detail turns a blind eye to staff not having their access cards) and discovers that abductees are being cloned.

An intriguing premise, that’s poorly shot and splendidly acted by the compelling Megan Lee Ethridge (who also cuts a sublime figure in all states of dress) one wonders where the $600,000 went. By contrast, Basket Case was lensed for about $40,000 and has atmosphere to spare.

It also flirts with the found footage genre (some scenes have the REC button appear on the side), a conceit that should be used sparingly as people whose lives are in danger aren’t usually so solipsistic as to film their predicament when it’s best to just run away.