Double Exposure is a pretty great title. In photography it’s the superimposition of two exposures to create a single image and the protagonist here is a photographer. He’s got a brother whom he closely resembles (minus a few limbs) and exposure refers to the revelation of a concealed identity.

At the outset, an undercover transvestite prostitute is stabbed in the neck while Buckhold and Fontaine, California vice squad members, look on helplessly, arriving too late to be of any help. Soon thereafter, models and prostitutes start disappearing and ending up dead.

Adrian and BJ are siblings. The former is a somewhat lecherous single fashion photographer and the latter is a stunt car racer with a drinking problem and marital woes, who lost a leg and arm in a driving mishap (one can only assume). Adrian’s seen in scene one, hounding a woman for a date in an elevator and then of all places, an underground parking garage.

Adrian and BJ inexplicably drive around in an RV while Adrian does fashion shoots with a stereotypically gay sidekick (this is the early 80s so there’s some ribbing at his expense).

Double Exposure is a bit of a twist on Antonioni’s Blow-Up, except that instead of witnessing a murder this shutterbug is implicated in the string of them. 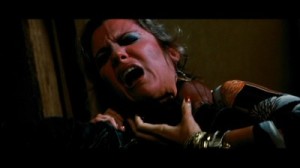 He begins to be plagued with nightmares of harpooning a swimsuit model and drowning her in a pool bottom, slicing the throat of a naked paramour in his bed, and shoving a poisonous snake and a model’s head into a garbage bag and tying it shut.

Not surprisingly, he starts seeing a shrink, who’s got a Freudian take on things, emphasizing Adrian and BJ’s mommy problems (mommy issues being a staple of 80s sleazebag horror, ever since Psycho opened the floodgates).

Adrian tries to drown his sorrows by hitting the track and mudwrestling bars with his brother and girlfriend but the body count keeps piling up (astute viewers will notice a very young Victoria Jackson from Saturday Night Live as a racetrack hottie).

“It was a simple relationship, you model I photograph!”

But things aren’t so simple. Who is actually stalking models, skewering and photographing them?

Double Exposure is a pretty well crafted slasher-cum-police procedural a la 1981’s Night School. However the tone is all over the map, funny, fun-loving and campy one minute, relentlessly sleazy the next.