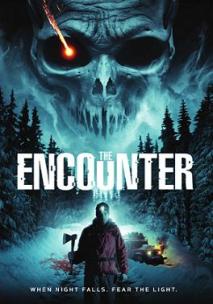 A found footage / alien fusion, The Encounter wasn’t something we were immediately keen on reviewing and it sat in our to-do pile waiting to hatch from its pod, as it were.

The found footage genre is polarizing. The format can frequently handcuff a filmmaker, who’s left needing light sources to compensate for the conceit of characters documenting the proceedings with small video cameras. Extra light is usually provided by a car’s headlights or in some cases, the sun (but often, things usually degenerate into lots of  running around in pitch black accompanied by heavy breathing and panic).

Of course no discussion of found footage is complete without mentioning The Blair Witch Project, which left viewers like us indifferent to the new genre, questioning how people could be so stubbornly solipsistic that they’d film them themselves when there were more pressing matters to attend to (admittedly, this was a half-decade before YouTube introduced the world to inappropriate and untimely over-sharing of everything imaginable) 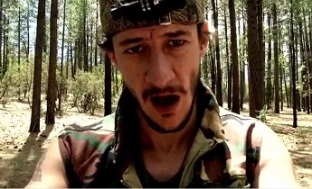 The Encounter injects a bit of body horror into two tired genres (alien and found footage) and the results are not dissatisfying, with the benefit of
multiple POVs to keep things rolling.

The film introduces us to an “unidentified contact” that confounds radar operators in New Mexico and bordering Arizona. It crashes into the dessert, but not before disrupting the tracking technology.

Meanwhile in Tempe, a John Wayne-quoting college film instructor Colin, takes out his buddies/girlfriends for a camping trip into the Arizona wilderness. That’s POV 1 of 3. The second is park forest ranger Alice, who provides video updates as part of her job. The third is a camo-wearing yokel outdoorsman Trevor, who affixes a camera to heighten the thrill of the hunt, accompanied by his shooting buddy Duncan. A dashboard cam captures Alice being bitten by something — we don’t know what — but it soon oozes and bests her first aid abilities. As per protocol, she attempts to radio Poison Control but no response is forthcoming as signals are mangled. The wilderness has become eerily quiet and her wound begins to ooze. 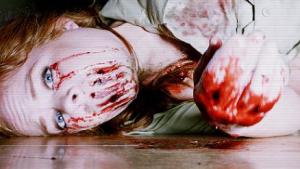 The rest of our documentarians fare no better. The camping buddies, which includes the requisite hot chicks (no nudity — people are understandably reticent about being nude on camera in this age of social media. Shucks) encounter much woods weirdness and attempt to get the hell out of Dodge — but not before ramming their car into a tree. The hunters find woods that are devoid of fauna, except for buck carcasses that have been ravaged by you know who.

There is some genuine creepiness to be had in The Encounter. Yes, there is an alien that looks like Monty Burns in The Simpsons X-Files episode, and yes characters filming themselves at every turn is unnecessary artifice, but there’s no denying fears that deliver.

Add half a star if you’re moved by the likes of Paranormal Activity and The Poughkeepsie Tapes.