“If you forgive, you have peace.” This sentiment seems incongruous coming out of Evander Holyfield’s mouth about Mike Tyson, the man who nearly bit his ear off.

But forgive he did. And Champs is an at times unforgiving boxing doc, with cover art that shows the sport’s precarious position on the sporting landscape; it seems like the fighter’s almost quit on his stool.

Floyd Mayweather’s clinical dismantling of Manny Pacquiao (this reviewer had it 10 rounds to 2 and would grudgingly concede perhaps a third to Pacman) disappointed many in that, the so-called Fight of the Century. It was an event that many hoped would rekindle interest in a sport burning its last embers.

While that spectacle did not, Champs just might. And it couldn’t come at a better time.

The sport’s current incarnation is a whale carcass being picked at by sharks. It ignored UFC’s bites, failed to develop a cohesive commission/titles and its bread and butter — the heavyweight division — became a dog’s breakfast of consonant-heavy Slavic nobodies. 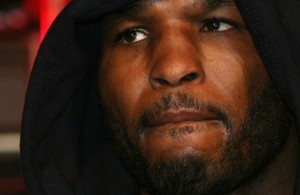 They recount their rise from nothing to everything, with comments from ringside staples like Denzel Washington, Mark Whalberg, boxing insiders like Lou DiBella and “Irish” Micky Ward to a slew of talking heads who look like they’ve never thrown a punch in their lives.

It’s fascinating to see how time has mellowed these champs, these hard men…and the casual observer and die-hard fan alike will benefit from hearing Hopkins’ insights into the sport (this as he prepares for perhaps a coda fight at the age of 50).

It might be tough to make a case for a sport that brain-injures 90% of its participants, (according to stats provided by doc-maker Bert Marcus) but Champs does it with aplomb and makes viewers question preconceptions.

Other sports have teammates, leagues, unions (players’ associations) and other levels of protection. Boxers face the peril all alone.

It might be too little too late, but establishing a unified commission on the heels of its recent TV deal, might put the sweet science back in the public’s consciousness — a place it definitely belongs.