You don’t have to do this!
You think after all this work, I’m going to be swayed by THAT?
Babysitter Massacre

On our podcast, we discussed clichés we dislike in horror movies, two of our least favorite being, a) “why are you doing this to me?” (isn’t it obvious, he’s a drooling psychopathic freak!) and b) “You don’t have to do this.” (well, he kinda does…see, a). So we were pleasantly surprised when Babysitter Massacre toyed with this convention.

Rubenesque babysitter Linda convinces the kid in her charge to take a nap while she takes a relaxing bath, but within minutes she’s the babysitter in the “babysitter and the man upstairs” urban legend, except the threatening calls are texts and the man’s got pliers.

The harassing / taunting phone call convention was well-played in the Canadian classic, Black Christmas and it’s interesting to see it deftly handled with current technology here.

Teen babysitters reunite as adults on Halloween, including one (tough girl, Bianca) on whom compatriot April’s death was blamed. Despite it being nearly a decade hence, the girls don’t forgive easily, accusing her of cowardice for not adhering to the buddy system and leaving April in the clutches of a maniac. 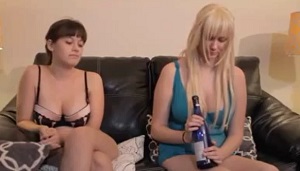 Bygones will not be bygones and soon Bianca’s gone, leaving the reunion and heading out to a Halloween party in Akron, Ohio.

In her absence, the ex babysitters’ club members get down to doing what victims did in the mid-80s: have pillow fights, try on lingerie and hit the booze. Meanwhile, locals are being preyed upon by a man in a white stocking mask and army jacket.

Babysitter Massacre is a very faithful, deft throwback to The House on Sorority Row and movies of that ilk (they even reference Sorority House Massacre) and astute viewers will recognize similarities to Halloween (the girl in bed mistaking the killer in disguise for her boyfriend and telling him to “knock it off, that’s getting creepy,” etc.). It’s way more sharply written and compellingly acted than it has any right to be. Erin R. Ryan as a small-town Midwestern girl-next-door is a delight.

Don’t let the title sway you: Babysitter Massacre is in many ways an improvement over its 80s brethren. The film’s got lots of nudity, terrific cinematography for such a low budget, crack dialogue and some genuine thrills courtesy of a straight razor. There’s even thoughtful musings on the nature of loss and grieving.