If you’re a parent thinking of forcing your kids into organized sports and living your dreams vicariously through them, think again. It could turn out to be your worst nightmare.

Resentment could breed despondency and for some, psychopathy as they realize a brief flirtation with the pros means they’re left to cope with life as Uncle Rico from Napoleon Dynamite  – nothing anyone incapable of growing facial hair (or anyone else) should have to deal with.

Here we look at Sports Equipment Murders so sinister and so savage, you’d have your kids joining gymnastics if it weren’t for the fact someone could be stomped to death with a rhythmic floor routine. Hey, stranger things have happened.

1. Shaun of the Dead – Cricket Bat

Part horror, part buddy flick, part rom-com, Shaun of the Dead injects quick wit into the lumbering zombie genre. The film takes the premise of the dead walking the earth and does not skimp on the gore or the funny. A good horror comedy is one that treats the horror elements with respect and focuses the laughs on the people dealing with the horror. Shaun balances both scares and laughs perfectly.

Much of the humor in Shaun comes from our heroes not having the foggiest idea of how to survive the threat. Shaun and his slacker buddy Ed know that they need to attack the head and not much else. So when the dead come a shambling, Shaun grabs the nearest weapon at hand, a cricket bat. It becomes his weapon of choice for bludgeoning the infected attackers back from whence they came. Like Ian Faith in This is Spinal Tap, our intrepid heroes find out that “having a good solid piece of wood in your hand is often useful.” The image of the red-tie wearing, shirt-sleeve clad Shaun holding his bloody cricket bat has become an iconic part of this zombie classic. 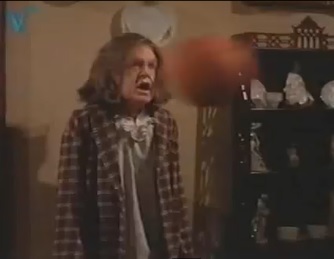 In this 1988 disaster, Nightmare on Elm Street visionary Wes Craven commits the cinematic equivalent of a half-court three-pointer by filming one of the most ludicrous deaths ever committed to celluloid. The original Buffy, Kristy Swanson plays Samantha, a teen who is killed when her abusive father throws her down a flight of stairs. In an attempt to revive her, Samantha’s friend, computer whiz Paul, implants microchips in Samantha’s brain. The circuits do the trick, but if films like Re-Animator and  Frankenhooker have taught us anything, sometimes the dead should just stay dead. The revitalized Samantha is now an unstoppable killing machine, bent on revenge.

One of Samantha’s victims is mean, old neighbor Elvira played by Anne Ramsey of Goonies and Throw Momma from the Train fame. Samantha grabs her, throws her up against a wall and hurls a basketball straight at her head. Elvira’s head shatters like a porcelain doll filled with raspberry Jell-O while her headless corpse stumbles around absurdly before falling to the ground.

Because Prom Night and Prom Night II left so many unanswered questions, among which, “why do these keep being made?” we get the Canadian-made Prom Night III. Part III  continues the tale of prom queen Mary Lou Maloney. Marry Lou wreaked high-school havoc in the second installment and breaks out of hell to continue the carnage in the third. Needing a conduit in the land of the living to help her fulfill her blood-lust, Mary Lou chooses Alex, a football-playing senior at Hamilton High.

Prom Night III is not without its share of goofy kills, including a teacher played by former Canadian Heavyweight boxing champion and World Boxing Hall of Famer George Chuvalo impaled by two ice-cream cones before being turned into a human banana split. However, the goofiest of them all has to be when Alex meets the homophobic captain of the football team out on the field. Suddenly, Mary Lou appears fully suited up, pigskin in hand and throws a limp-wristed pass. The football inexplicably turns into a giant drill mid toss and eviscerates the captain. Not a Hail Mary; more like a flail Mary.

Often cited as the absolute nadir of the Friday franchise, Jason (barely) Takes Manhattan has an absolutely ridiculous yet hilarious sports-based kill. In the film, a graduating class is aboard a luxury boat bound for Manhattan. Unbeknownst to the passengers, captain and crew, the boat has a stowaway – the Hockey-masked killer himself, Jason Voorhees.

One of the seniors on board is Julius Gaw, an amateur high-school boxer. When the boat finally docks in the Big Apple, most of the passengers have shuffled off this mortal coil, but Julius remains. He attempts to go the distance with the killer of Crystal Lake. He certainly gives it his all: Right hooks, left hooks, body blows and jabs, but all to no avail. In a mismatch worthy of Willard vs. Dempsey, Jason shrugs off every blow then delivers one single uppercut, knocking poor Julius’s head clean off his neck and into an awaiting garbage dumpster.

Zombieland is another zombie-comedy done right. In addition to featuring one of Bill Murray’s funniest performances, Zombieland also has a game Woody Harrelson as Tallahassee. Every one has their own reasons for wanting to survive the zombie apocalypse, but for Tallahassee, finding and eating the last remaining Twinkie is just reason enough to continue living.

Tallahassee employs a number of zombie-bashing weapons including shotgun, banjo and garden shears, and of course, a baseball bat.  For more baseball brutality see The Untouchables, Inglourious Basterds, Casino and the 2003 Detroit Tigers.

5. There Will be Blood – Bowling Pin

While not a horror movie, There Will be Blood makes our list for having what may be the best sports equipment-abetted death in cinematic history. In the film’s climax, Daniel Day Lewis’s robber-baron oil prospector Daniel Plainview haphazardly rolls balls (though not on Shomer Shabbas!) at Paul Dano’s hypocritical preacher Eli Sunday. Plainview than grabs a pin and repeatedly “strikes” Sunday down as Sunday begs for Plainview to “spare” his life (Thank you, try the veal. Anyone here from out of town?) Brutal and brilliant.

Keeping with the theme of the sport of kings, one of the few along with curling, you can do while recovering from invasive surgery, we come to Wishcraft, a film about a mysterious totem received in a package….that has a gruesome bowling ball beating. When will these people ever learn? When you receive a mysterious package with a dead language inscription, send it to an anthropologist in another time zone.

True, Jason donned a hockey mask. But his choice of killing implement never once matched his facial attire. And never did we see Mr. Voorhees on ice skates (although it wouldn’t be so far-fetched considering the franchise at one point sent him into outer space.) No, for a killer on ice skates, one need look no further than the 1983 Canadian tax-shelter gem Curtains. In Curtains, six actresses venture to a remote hinterland mansion to audition for a movie role, and of course, are dispatched one-by-one by an unknown killer.

One of the hopefuls is Christie (Lesleh Donaldson), a known figure skater with hopes that the role will jump start her acting career. One morning, Christie heads out to the frozen lake to for some practice. After a few spirals and Lutzs (though none that would have Dorothy Hamill lose any sleep) the music from her boombox suddenly stops and Christie looks down to find a creepy-looking doll (aren’t they all?) buried in the snow. As she’s admiring the doll, a lone figure brandishing a sickle and wearing an uber-disturbing old lady mask skates towards Christie. Let’s just say that Christie will not live to Salchow another day. 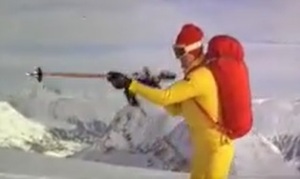 Honourable Mention, The Spy Who Loved Me – Ski poles.

James Bond had at his disposal a whole slew of weapons, one of which was a ski pole to fire while skiing backwards and evading nefarious Russians on the Austrian slopes. Metal-toothed Richard Kiel plays Jaws and speaking of which, Steven Spielberg was approached to direct but was busy with a bigger boat.

For those that don’t consider skateboarding a sport, just watch professional boarders such as Chad Muska and Rodney Mullen. For every pre-pubescent punk yelling “skate or die, dude” at the local skate park while failing to perform even the most basic kickflip, there’s Tony Hawk, an athlete with a net worth of $120 million who was invited to skate in the White House, on the floor of the New York Stock Exchange, and has appeared as himself on The Simpsons.

Going from the sublime to the ridiculous. Bloody Birthday is a 1981 schlocker in which, at the height of a solar eclipse, three women give birth to three separate children. Because they were born during the eclipse, the three rugrats, two boys and a girl, lack any sort of conscience and have grown to become remorseless 10-year-old killing machines (there’s some sound causal analysis right there!) The father of one of the terrible tykes is Sheriff Brody (a popular name for sheriffs it seems.) Brody’s daughter beckons her father to come outside, hoping that he’ll step on the skateboard placed on the steps by one of the boys. Brody does sidestep the skateboard, narrowly avoiding certain death, but then the third kid steps in, pulls a Ted Williams, and bashes the poor sheriff’s brains in with a Louisville Slugger. Here are some more unique horror movie weapons.