CHECK OUT OUR BASKET CASE PODCAST!

1970’s and early 80’s New York was a far different beast than the Giulianified theme park it has become. Grungy, seedy and sleazy, the Big Apple of the 70’s was rotten to its core. Times Square was a particular den of iniquity. Filled with all-night grindhouses and porno cinemas, sex shops and flophouses, Times Square was a place where you’d be more likely accosted by a junkie transsexual hooker than some freak in a moth-ridden Elmo suit looking for a hug. Filmed predominantly on and around 42nd street, 1982’s Basket Case, written and directed by Frank Henenlotter, is as accurate a cinematic depiction of that bygone era as you’ll ever see.

The film begins as many a Poison video does: With a wide-eyed country bumpkin moving to the big bad city. Unlike a Bret Michaels’ opus, however, this country bumpkin has an Adam’s apple. His name is Duane Bradley, played by Kevin VanHentenryk. He may be male, but for sheer volume and size, Duane’s awe-inspiring white man’s ‘fro rivals any big-haired 80’s video vixen any day of the week.  Duane’s only piece of luggage is a large basket which could feasibly hold all his hair products but instead houses Belial, Duane’s malformed, surgically-removed Siamese twin. Belial is a twisted misshapen little creature with razor-sharp teeth whose design the creators of the Teenage Mutant Ninja Turtles’ cartoon totally ripped off when they “created” Krang. Clutching the basket tightly to his chest, Duane wanders 42nd looking for a place to stay.

He stumbles upon the Hotel Broslin; the type of place where you can rent a room for “a couple hours, a couple years…what!” The hotel is so squalid it gives new meaning to the phrase Hotel Hell. 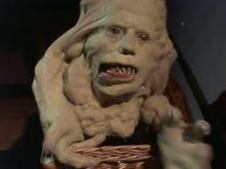 What I wouldn’t give to see Gordon Ramsey spend a night or two there.

Duane pulls out a large wad of cash, of which Henenlotter (I assume) joked was actually the film’s entire budget. Big mistake. You don’t pull out a wad of cash in NYC unless you’re in a gentleman’s establishment attempting to “make it rain.”

Duane and Belial are on a mission. Seems when Duane was younger, a trio of doctors surgically removed Belial from Duane’s side in a clandestine medical procedure and then callously left Belial in a trash bag to die. Now Duane and his “squished octopus” of a brother are looking to enact a little vengeance, Sonny Chiba style.

The two brothers share a telepathic bond and Duane feels what Belial feels, so when he decides to leaves Belial alone in the hotel to tour the city with the pretty receptionist he just met, poor Belial can’t help but feel deserted. Big mistake! Belial trashes the room in a manner so violent it would make Keith Moon proud. A neighbor enters to steal the cash. Big mistake! Belial mauls him to death.

than a rubber puppet, but committed performances from actors who flounce and flail while holding a Boglin to their face, combined with effective grue and viscera make for a convincing effect. In the few scenes where Belial is animate, it’s rendered in charming stop-motion.

Basket Case is one of those transformative films for me. The tape was ubiquitous in the old (and dearly lamented) mom and pop video shops. The cover transfixed me, and when I finally managed to rent it, I couldn’t believe what I was seeing. Cheap, grubby, highly-original and entertaining from the first frame to the last. They just don’t make films like this anymore although they damn well should!