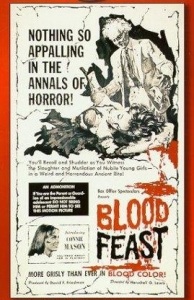 **LISTEN TO OUR INTERVIEW WITH HG LEWIS ON THE PODCAST**

Gore. For many, the raison d’etre of the genre. A good horror flick need not have it and many do not. Knuckle-whitening suspense, taut pacing, superb atmosphere, nuanced characterization and expert plotting can all contribute to a successful horror film. 1963’s Blood Feast features none of the above. But it does have gore; lots and lots and lots of juicy, squishy, stomach-churning gore! And we like gore. Thus we like Blood Feast!

Blood Feast, the first of the infamous “Blood Trilogy” writer and director Herschell Gordon Lewis made with producer David F. Freidman, is credited as the first ever gore/splatter film, and it changed the course of what a horror film could do/show. Whether that’s a good or a bad thing is up to the individual (we fall squarely on the side of the former), but Blood Feast’s importance to horror is undeniable.

Like Elvis, the film broke down barriers and changed perceptions of its genre forever. U

nlike Elvis, Blood Feast is in many ways garbage and the very essence of incompetence.

The film begins when a young lass slips out of her enormous granny panties and steps into a nice, warm bath. Suddenly, a grey-haired, caterpillar-browed, bug-eyed maniac who bears an eerie resemblance to Michael Richards bursts into frame. He stabs the nubile nudie in the eye and hacks at her with a dull machete. He removes her leg and sticks it in a sack. Cut to her bloody stump and her red-paint covered body and away we go!

The maniac is Fuad Ramses, an elderly Egyptian who walks with a pronounced limp and is the proprietor of Fuad Ramses Exotic Catering (no apostrophe). In real life, Fuad is Mal Arnold, a then 30-year-old in unconvincing make-up who is as close to being Egyptian as Johnny Depp is to Cherokee Indian. Duncan does attempt a shaky accent, but it is more Bela Lugosi than Omar Sharif.

A full plot synopsis of Blood Feast is pointless as there isn’t much of one to speak of. Fuad is a disciple of the Cult of Ishtar… or Eetar…or Eetah depending on who’s saying it. In the back of his shop is a shrine to the goddess Ishtar, including a golden statue which looks more like a department store mannequin covered in gold spray paint. Fuad is not much of a businessman as he keeps going into the back to speak indecipherable mumbo-jumbo while stirring the requisite bubbling cauldron. All this without locking the doors or placing 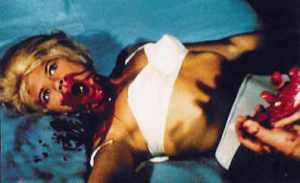 one of those “back in five minutes” signs in the window.

Seems Fuad is preparing an ancient Egyptian Blood Feast for a socialite’s birthday party. A Blood Feast, according to ritual, requires female sacrifices and body parts aplenty, causing Fuad to go on a murdering spree which terrorizes the townsfolk and leaves the local law force baffled. Kids are bludgeoned, brains, hearts and other entrails are removed, faces are hacked to the bone – all in vivid Technicolor. Blood Feast!

The lurid poster for Blood Feast screamed”Nothing so appalling in the annals of horror!”, and it may as well have been referring to the acting. This is a film in which not one member of the cast –not a single one- can convincingly read a line. It’s almost a form of anti-acting. Special mention must be made of Connie Mason, a former Playboy playmate who was cast as the birthday girl Suzette. Of Mason, Lewis said “She never knew a line. Not ever….I often felt if one took the key out of Connie’s back, she’d simply stand in place.”

Much has been said about the ineptitude of law-enforcement officers in B-movies, but the murder investigators in Blood Feast are so clueless they make the Keystone Cops look like Popeye Doyle.

The lead investigator, Detective Thornton, is played by William Kerwin who was billed at the time as Thomas Wood, a more appropriate name as it both describes his screen presence and his delivery of lines such as “this looks like one of those long, hard ones” when describing the investigation. Despite dating Suzette with whom he attends a 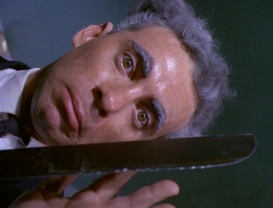 lecture on ancient Egyptian rituals where the blood feast is described in meticulous detail, despite knowing that Suzette’s mother is throwing her a blood feast, and despite the fact that there is exactly only one Egyptian who resides in town, Thornton just can’t piece together who the killer is. One thinks that if Fuad walked by Thornton wearing a t-shirt that read “I’m the killer, dammit!” Thornton would still be baffled.

The film culminates in the most ridiculous pursuit since the O.J. white Bronco chase. Fuad, who is lame and drags his foot around like a 50-pound sack of potatoes, is chased by a number of able-bodied officers who just can’t seem to overtake him. A garden snail would provide a more successful pursuit than these sloths.

It would be easy to poke fun at Blood Feast’s many, many shortcomings (and actually we just did) but the fact remains that the film is required viewing for any serious horror fan, particularly those who identify themselves as Gorehounds. Any time an eyeball is impaled, a throat slit or a belly eviscerated, homage must be paid to the Godfather of Gore Herschel Gordon Lewis. Besides, according to Lewis, Blood feast is akin to a Walt Whitman poem: “It’s no good, but it’s the first!”

One thought on “Blood Feast”