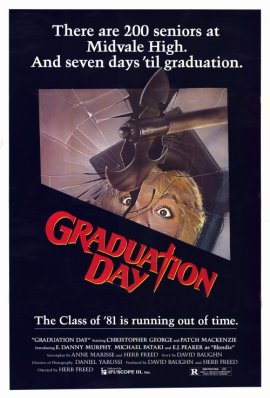 In the early 1980’s, after the success of Halloween and Friday the 13th, theaters were inundated with slasher films commemorating a specific event or day. In quick succession came April Fool’s Day, Prom Night, Mother’s Day and Graduation Day. Thankfully this trend died out before producers made a film entitled Tuesday (although I do think there may have been a “Hump Day” but that would have been in an entirely different genre.)

Graduation Day is a slasher that couldn’t be more by-the-numbers. The high note of the film is the opening athletic musical montage set to a discofied number by Lance Owg entitled “The Winner”. A film that starts with a montage is writing a huge cheque that Graduation Day just isn’t able to cash.

Après montage, high-school track superstar Laura collapses and dies of a blood clot just as she’s victoriously crossing the finish line. Cut to Laura’s sister Anne, a navy officer returning home from Guam to accept a posthumous trophy on behalf of her sister to be handed out on, yep, Graduation Day. Anne accepts a ride into town from a lascivious truck-driver inexplicably wearing a white neckerchief who utters the lamest enticement for engagement in non-consensual coitus that these ears have ever heard. “C’mon. Give a guy a break…I’m a taxpayer!”

Cut to a girl running alone in the woods. She is being stalked by an unseen killer brandishing a stopwatch, and in true Italian Giallo fashion is also wearing a black glove. Just once, couldn’t a killer in one of these films be an Autumn? Slash, splatter, dead. Seems the modus operandi of the killer is to take out each member of the track team one-by-one. Soon the red herrings pile up at a furious pace as the number of team members gradually dwindle. Could the killer be the gruff and salty coach? How about Laura’s alcoholic stepfather? Maybe it’s the school principal. Or what about Anne herself since she’s described as “weird” by one of the school seniors despite not exhibiting any signs of weirdness whatsoever. Or how about none-of-the-above. In the biggest boneheaded move, the killer wears a fencing mask to conceal his identity which the filmmakers chose to shoot straight-on, rendering the killer’s face completely visible and recognizable about two-thirds into the film. Hitchcock would be proud.

Ultimately, there is zilch to see here as Graduation Day brings nothing new to the slasher genre. The film’s biggest innovation is employing a dog rather than a cat for the requisite animal fake-out scare. The suspense is nil, the grue is minimal, and the obligatory nudity is ever-so-brief  (only four breasts, although two of them belong to scream-queen Linnea Quigley so that’s always a treat).

For slasher completists only.