The “driller killer” (pictured here) coos lines like “…got a penthouse at the Ritz, I bought it with my hits!” and “let’s buzzzzzzz!” lights up smokes, chugs wine and shimmies his hips before putting his victims through any more horrors. As Confucius says: “clever talk and a domineering manner have little to do with being man-at-his-best.”

The sequel, minus the definite article, follows on the heels of the fun 1982 exploitation film as Courtney, the younger sister to the star of The Slumber Party Massacre, still suffers from nightmares related to the first film. And rightly so. That one was pretty bad.

There’s also a great subplot involving an all-girl group whose music melts the heart of the local dreamboat (who, when invited to “the ultimate slumber party weekend”, is at least a decade older than anyone who would conceivably ask “whether the parents will be there.”) 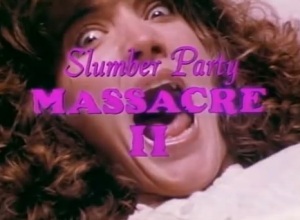 The group’s drummer’s reading tastes lean toward “Hot, Wet and Wild”, presaging a corny pillow fight and dialogue to match when their suitors arrive to the party at the window: “I didn’t know girls really did this stuff!!”

The killer, the love-child of Gene Vincent and John Travolta (Grease-era) prefaces his kills with the witch cackle from the Surfaris 1963 novelty hit “Wipeout“. In dispatching the scantily-clad cast he spoils the fun – as usually happens in these kinds of flicks.

Despite favoring the look of 60s leather / rockabilly / greasers the driller killer opts for the screaming Van Halen guitar histrionics popular with the 80s, and memorably puts his guitar / drill through the chest of the boyfriend.

Sadly, the Runaways-style girl group cannot live up to that concept, by escaping. However, one does, leaving the film open for a sequel!