If you wanna see a bunch of National Guardsmen in peril, go watch Walter Hill’s outstanding Southern Comfort where warriors come out to play-ee-yay with your emotions in a sinister, underappreciated horror you’ll definitely appreciate more than The Hills Have Eyes II.

The first Hills remake had its detractors (not here), but Alexandre Aja (High Tension director, Maniac writer) crafted a capable film — as the Washington Post put it, “even as he reinvents, Aja invents…”

That one was way better than it had any business being, given the woebegone state of horror movie re-dos.

Here, we have Martin Weisz on the directorial stool, a man whose experience derives predominantly from music video shoots for Sisqo (maybe he does know a thing or too about horror? “Thong, thong, thong, thong, thong” is pretty darn horrifying).

What he brings us in The Hills Have Eyes sequel though, is all the annoying quick cuts from his day job as well as a bunch of truly terrible CG blood (for a movie featuring some terrific viscera from Greg Nicotero, why’d they even go there?)

We’re back in the unforgiving desert, in New Mexico’s Sector 16 rather than the Simpsonian Sector 7-G, and a bunch of carbon blob, er, National Guard soldiers are being put through their paces in a training mission replicating the rugged geography of Kandahar, Afghanistan.

The setup involves standard military movie-issue intra-ethnic tensions, cussing, dim banter, a hard-nosed sarge and the inevitable ball-busting: “One good thing about being dead. Wouldn’t have to listen to all your bullshit!”

All of a sudden a distress call comes through, and the team has to rescue some researchers. An easy-breezy training exercise becomes deadly serious.

That’s when “you know who” pounces – those cannibalistic A-Bomb mutants lurking in desert caves.

Who knew Wes Craven’s incomparable creation would be reduced to this overly slick, jump scared-filled mess? (Craven shares the blame for co-writing this fiasco, one of the more poorly written horrors you’ll ever see.)

One thing that can be said about The Hills Have Eyes 2 (or II): You’ll never look at a porta-potty the same way. Guess it is an accomplishment to make them even MORE disgusting… 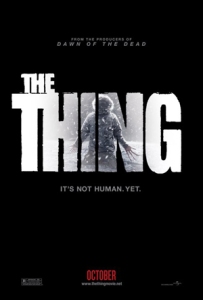 “Unnecessary” is a common rebuff for sequels and prequels, as if art itself is actually necessary (maybe as nourishment for the soul, but not in the same way say, chemotherapy or quitting smoking is necessary).

So The Thing is Matthijs van Heijningen Jr’s prequel to the John Carpenter film everyone knows and loves, or should know / love if they’re in the same ballpark when it comes to intemperate Carpenter worship as we are here. The 2011 film is, yes, probably unnecessary. It’s a pretty loving tribute, nice to look at, and mildly compelling, until about half-way through. At that point it peters out like a basketball team shooting the lights out and gassing toward a feeble finish.

The Thing has the makings of a good film from the outset. The camera lingers on an ominous Antarctica.

The location scouting is absolutely dynamite. This looks, and feels…VERY cold indeed. Chilling, you might say.

And when the creature bursts forth from its icy Jacuzzi, it’s a fantastic and highly memorable scene. The effects are kinda good too. Guess they kinda have to be. Carpenter’s Thing had special effects done by Rob Bottin and company, as well as makeup effects legend Stan Winston. Talk about a two-man all-star team. Many have taken umbrage with the CG, but it’s not nearly as bad as you might think.

As for the cast, the Norwegian crew is hilarious and energized, especially when belting out the unlikely Eurovision Song contest entry showstopper, “Sámiid ædnan” (it’s anyone’s guess how that’s pronounced).

But somewhere along the way in this Thing, the crew, poking around around all that ice at the Norwegian research base, become insufferable.

Putting disparate people in harm’s way, is one of horror’s hallmarks, both for zombie films -and it almost goes without saying here as the similarities are apparent – Alien.

But when you stack up this cast against Kurt Russell and company, the guy with a 13-year old’s haircut from NCIS: Los Angeles, just doesn’t quite measure up.