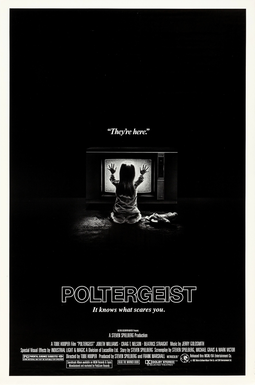 In the midst of this pandemic, we are all at home being swallowed up by our screens, so the little girl in Poltergeist is no different in a way.

There’s no getting around it: this one’s iconic and influential, a warm nostalgia bath of 80s goodwill, some amazing performances and cheap ‘n’ cheerful special effects.

Tobe Hooper may have helmed Poltergeist, but there’s no mistaking the Steven Spielberg influence, making this much more Close Encounters of the Third Kind than The Texas Chainsaw Massacre in tone and execution, for better or for worse. And horrorphile preference will color perceptions here, though that’s not to say the Spielberg influence means the gore will be tempered. There is one scene in particular that’s almost Fulci-esque.

The Freelings live a run-of-the-mill suburban existence in a planned Orange County community, meant to mirror the experiences Spielberg had growing up in Arizona sprawl, and a kid of Reagan wet-dream.

Steve (Craig T. Nelson) is a developer while wife Diane (JoBeth Williams) takes care of the kids, including Carol Anne, all wide-eyed and bangs. The young girl awakens and begins chatting with a static TV screen, then promptly disappears but not before declaring “they’re here.”

Who are “They?” That’s what Poltergeist gets to the bottom of, as weird goings-on transpire, such as a gnarled stump of a tree that transmogrifies, and a dining room set that does the same, kinda.

A team of para-psychologists join in into investigate, sagging the proceedings with a Ghostbusters-lite feel, before the the film dials it up another for a rip-roaring finale.

The real star here though, is pint-sized medium Tangina, played by Zelda Rubinstein, about whom the late great critic Pauline Kael said [she] “gives the movie new life and makes a large chunk of it work.

[Check out our discussion of Poltergeist on the Really Awful Movies Podcast!]