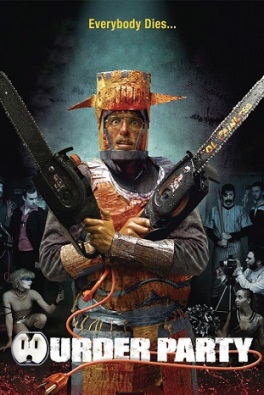 Didn’t we learn anything from Lamberto Bava’s Demons? Never accept a weird party invite (in that one, it should’ve been even easier to heed that advice too. The guy wandering around in a silver mask in a Berlin train station was one odd dude). In Murder Party, the protagonist, Christopher, is a lonely sad-sack. (How do we know this? The pet cat/single guy speaks volumes, even as he doesn’t)…So any socialization will do, even an invite that instructs him to “come alone.”

Christopher’s wandering around a New York borough when he spots said Halloween party invite on the ground, directions to a “Murder Party.”

And perhaps inspired by his hairy feline, Sir Lancelet, or the boys in Monty Python, he heads to his humble apartment and slaps together a Crusader costume from cardboard and duct tape and ventures out into the night a passable knight.

Chris makes his way to a not-yet-gentrified part of Brooklyn, wanders down an alley, and enters a sprawling warehouse space. It’s there that a group of art students take him hostage, all part of some diabolical plan to maybe turn the taciturn parking enforcement officer into some kind of hipster inspiration for a Death of Marat. The art school crew comes bedecked in Hammer Horror vampire, Warriors-related attire to name a few.

The collective, true “fauves” conspire to make Chris’ death, the life of their art, and debate how they’re going to go about doing it and which medium they’ll choose.

Murder Party shows a real flare for exterior horrors, even as the bulk of the film takes place in one space. There are some choice digs at the cloistered world of modern art, and few punches are pulled with racy banter.

The third act kind of dries up after an inspired start. Still, there’s a lot of fun and for an indie horror, it’s executed oh so well.