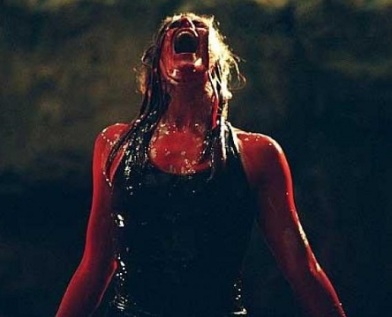 “I am in blood stepped in so far that should I wade no more, Returning were as tedious as go o’er.” That’s from Macbeth.

Gory visuals of blood can cause a significant drop in both heart rate and blood pressure, reducing the amount of oxygenated blood flow to the brain. In a Ohio University study, more than 27% of respondents said they feared fainting before donating blood, compared with the figure of people who actually faint (4%). Blood injury and injection (BII) phobia is a really common psychiatric disorder

There’s a reason blood is so liberally deployed in horror films.

The real tragedy as far as the horror movie genre is concerned, is that scary films are seldom critically lauded except when there’s restraint when it comes to blood and gore.

Mass market sanguine-free supernatural releases are among the few times the tower gatekeepers descend from the parapets and deign it worthy to review a horror film. Occasionally, relatively bloodless slashers slip through the cracks (Halloween and Child’s Play were warmly received).

Blood doesn’t make a good movie bad, nor the reverse. And handled correctly it’s a showstopper. Handled incorrectly and it’s a CG mess, covering up sloppy film-making like a rust-bucket’s paint-job. Evil Dead, Blood Feast, and Dead Alive are a few of our favorite syrupy, bloody messes (for those interested in Blood Feast, listen to our podcast interview with maverick splatter-horror director, the late H.G. Lewis)

Oddly, many films with blood in their title aren’t all that particularly bloody (and there are a LOT of plasma-related movies: Bloody Wednesday, Blood Hook, Silent Night, Bloody Night, Blood Rage, etc, etc). But that’s probably just marketing.

Of note, two of most influential films in the entire horror canon have blood in their title, Herschell Gordon Lewis’ Blood Feast, and Mario Bava’s A Bay of Blood.