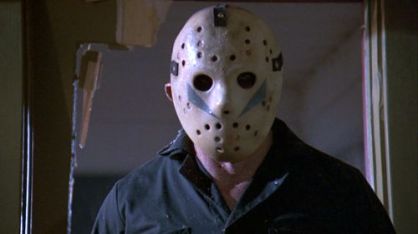 Is every moment a fresh beginning? If you’re TS Eliot, you’d say so…but a series like Friday the 13th? Lately it’s been more whimper than bang.

When did chinks start appearing in the Jason armor? Maybe here, with Friday the 13th: A New Beginning? Possibly, but there’s still so much nuttiness that it makes for a very compelling series entry indeed.

Friday the 13th Part V, follows up on the tale of young Tommy (Corey Feldman), who managed to escape the clutches of the Butcher of Camp Crystal Lake. This was a point where recent Hollywood whistle-blower Feldman had yet to become a star big enough for his agent to pull him away from this project (The year this was made, 1985, was the same year Corey’s career took off in The Goonies).

Here, Tommy is at the grave site of Mr Jason Voorhees. It’s a disturbing scene, in more ways than one, as Jason’s supposed “final” resting place is being beset by grave-robbers. In a downpour, Tommy watches as Jason re-animates (maybe a misnomer, as he wasn’t really dead) and eviscerates his two desecrators.

Tommy is then taken to the local sanitarium, one Pinehurst Halfway House (run by the Unger Institute of Mental Health), a secluded residential treatment facility for youngsters. He’s got the flop sweats, and has still got his creepy masks in tow, mostly as a tie-in to the fourth movie in the series…But not really. It’s at the facility where Tommy is introduced to his fellow misfits, as well as the centre’s overseers and staff. 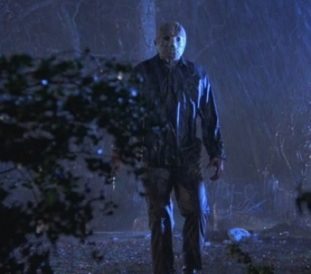 This includes: a Blondie knock-off, Violet, a Goth-lite whose bad akimbo dancing matches the lurching Crispin Glover in Friday the 13th: The Final Chapter; Reckless Reggie, a little African-American kid whose grandpa is Pinehurst’s chef; chunky chocolate aficionado, Joey, and an assortment of townsfolk lifted straight out of the Beverly Hillbillies.

Meanwhile, two of the town’s greasers have been murdered by their ride, two lovebirds laid waste in a thicket, and a masked man is on the loose, even as the mayor proclaims Jason is, “a handful of dust!”

Friday the 13th: A New Beginning is wacky and lovable, with a bunch of illicit drug-taking heretofore unseen in the series. There’s a cat jump scare that could’ve appeared on Mad TV, and death-by-shears ripped off from the proto-campground gore-fest, The Burning.