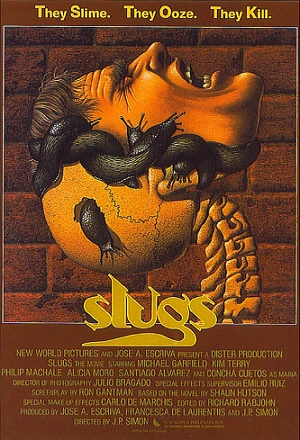 In journalism, a slug is a short name given to an article in production. Also short, the entirely comprehensive (and accurate) IMDb summary of Slugs: “killer slugs on the rampage in a rural community…”

And rampage they do.

Now, there is a list as long as your arm of horror films adapted from novels: The Shining, Jaws, Deliverance, Psycho, Rosemary’s Baby, but little did we know…so is this one. Author Shaun Hutson (who also did the UK film novelization of The Terminator) told This is Horror, “The film isn’t great, I think we’d all agree on that, but it’s not the worst film I’ve ever seen in my life. Honest. There are far worse films with far bigger budgets foisted on the public every week!”

Juan Piquer Simón (as J.P. Simon) directs this Spanish-American production (our pal Chris Alexander from Shock Til You Drop does the Blu-ray audio commentary). He also the man behind the memorable — for all the wrong reasons — Pieces.

And yes, things couldn’t get any more simple.

Like other eco horror features, Slugs good ol’ toxic waste gets things rollin’. And there’s a voice of reason, whose warnings go unheeded. And that voice belongs to Mike Brady, and, a la Matthew Bennell (Donald Sutherland) in Invasion of the Body Snatchers, he’s a health inspector. There’s even a scene where Brady is looking into safety concerns at a local boîte.

But what puts Slugs over the top, is its incredibly slimy gore. There are exposed eye sockets, innards, outards, etc. And also, some of the slugs contain parasites. In one evocative scene, a woman’s making a light dinner (a salad) for her beau, and anyone with any anxiety about food prep safety, will be particularly swayed by this one…and you see her cut a cross-section of the creature with a kitchen knife. It’s simply incredible.

Also, an amorous couple gets swarmed by slugs in the boudoir. It’s almost too icky.

[CHECK OUT OUR SLUGS PODCAST!]