In a far distant dystopia (weirdly, in the Year 41), the world’s water resources are being tightly controlled. And it’s up to the the rebellious young residents of an orphanage/prison, the Solarbabies (not the Aquababies, mind you) to do something about it, and wrest control away from the villainous, jack-booted Eco Protectorate.

Still, Solarbabies has all the genre’s hallmarks: an oppressor class, enslaved people keeping society (what’s left of it) functioning; a quest for a water-drenched paradise; terror-drome combat sports; an antediluvian oracle who makes Dumbledore look spry by comparison; dune buggies, and of course, a barren, sandy wasteland.

Solarbabies (1986) has two pop culture cash-ins: The Walkman, (whose popularity peaked between 1987 and 1997) sported by young star Lukas Haas (Witness) and a cast of roller skaters. How this footwear is appropriate for a desert landscape is never explained, but luckily, the Eco Protectorate, for all its turpitude, has paved much of the misbegotten landscape for easy escape.

In a nutshell: the powers that be are fighting over a supernatural omniscient orb, Bohdai, who can make it rain like it’s a gentleman’s club.

Somewhere along the line, we veer into Mad Max territory with a bunch of indentured servitude water processors (who are predominantly Aussie) and the Solarbabies get assistance from the Eco Warriors to help turn the tide…this may sound like a cheesy premise, but the inconvenient truth is, this mega-bomb is a hella-fun flick! 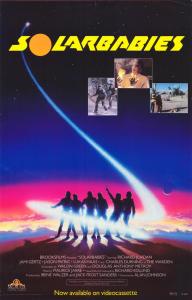 With a budget of $25 million plus, this dud earned back under $2 mil.

And the flick wasn’t exactly the toast of critic town, with the likes of the Washington Post saying, it’s “a hilariously bad movie that doesn’t make much sense and isn’t much good when it does.”

Much to our delight, Solarbabies is a rip-off extravaganza, with nods to E.T., The Road Warrior, Star Wars, Lawrence of Arabia, and Rollerball. Director Alan Johnson keeps things movie with chase scene after chase scene (and even an Dukes of Hazzard-style gorge-jump for good measure).