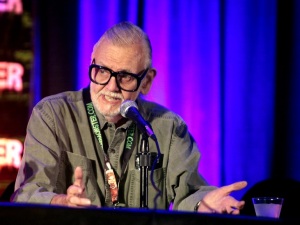 You always remember your first.

George Romero’s Night of the Living Dead was the horror movie gateway drug for this author, age 11 or so, on a Halloween night long ago, chopped to bits on Buffalo’s Fox affiliate WUTV yet still retaining its indelible impact. Sure, frights had come before (Dr Who’s creepy score, those saltshaker Daleks, and Christopher Plummer skulking about London’s East End hunting for Jack the Ripper) but this film was intentionally sought out for its scares, by a kid looking to earn his stripes in what’s become a lifelong obsession — horror.

Night was the perfect cinema accompaniment to the perverse joys found earlier within the pages of HP Lovecraft, Edgar Allan Poe and Stephen King (if your childhood differed, you really missed out).

The film was the ideal portal to transcendent frights— violent, but not excessively so (but just enough to leave you wanting more), black and white to tame the terrors ever so slightly for someone that young, and a confounding message that resonated, even though one didn’t exactly know why.

Romero’s canonical Dead movies can be ordered and re-ordered every which way, with as many unresolvable (and correct) arguments as to which is best and why. They’re the stuff of bar night arguments, worthy of any GOAT sports parley. They can be endlessly watched and re-watched without losing one iota of impact, and there’s not many films like that, especially in horror.

Creepshow, though flawed, was a rite of passage for many…The Crazies, since eclipsed by far better exemplars, nonetheless instilled a love of bio-hazard films. And for a guy who is best known for giving zombies their due, George Romero’s Martin is one of the Top 3 vampire films ever.

Most directors’ creative output diminishes over time. And his was no exception. But without Romero’s efforts, horror films would’ve likely continued to get the short shrift, critically speaking.

To paraphrase Stephen King re: Night of the Living Dead, George Romero “play[ed] a number of instruments, and he play[ed] them like a virtuoso.”

RIP sir, and thank you for all you’ve done. We owe you so, so much.

One thought on “Remembering George Romero”