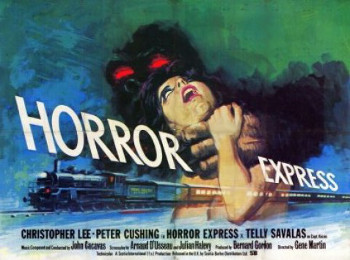 [CHECK OUT OUR HORROR EXPRESS PODCAST!]

When you gaze up at the stars, you are looking back in time. So too, apparently, if you gaze into the ocular fluid of a primitive creature unearthed from a Manchurian cave. Science!

Horror Express is an oddball film to say the least, set in the claustrophobic confines of a choo-choo a la Jamie Lee Curtis’ Terror Train, albeit with a conveyance that looks like a wide-body 747.

Train travel for a time was glamorous, then became unglamorous,  and has remained largely that way, at least in North America. Here, the train looks positively fabulous, with nice curtains, loads of amenities in the form of lots of booze, and ways to whittle away the hours chugging through Siberia, with sociable pastimes like chess. Too bad about the killer creature on board.

Christopher Lee is Dr. Saxton, an anthropologist whose giant crate is occupying space that probably should be used for luggage aboard said train. Its contents: along with a bunch of fossils, the head of monster that looks like something Lucio Fulci would puke up. The curiosity of everyone on board is piqued and a rival anthropologist (Peter Cushing as Dr. Wells) pays off a porter to drill a hole and take a peek inside. 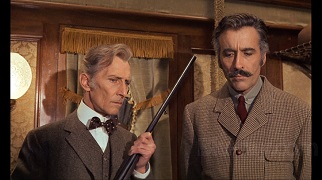 He declares that the “devil fears an honest Cossack,” before declaring everyone on board under arrest. Is that the way habeus corpus works on the Russian steppes?

And it turns out that the killer missing link has within its eyes, at a molecular level, imprinted memories of its journey from outer space. We shit you not. There’s even a mad Rasputin monk to add to the proceedings, which makes this can’t miss Amicus.